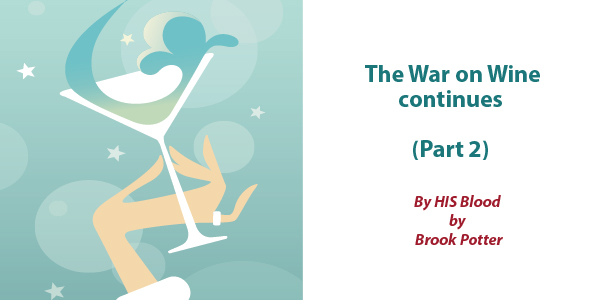 Continued from The Religious War on Wine – Part 2…

Matthew 11:19 The Son of man came eating and drinking, and they say, Behold a man gluttonous, and a winebibber, a friend of publicans and sinners. But wisdom is justified of her children.

When I was a young Christian, I used to enjoy the sermons by Charles Finney. There was an especially good message about “God cannot please sinners!” In this message, Finney described the impossibility of pleasing sinners, by contrasting the life of John the Baptist and Jesus Christ. In his explanation, he pointed out that the one called John the Baptist didn’t eat anything exotic nor did he drink wine, and they said of him: he has a devil (Matthew 11:18).

That’s in contrast to Jesus Christ coming and both eating and drinking, and they labeled him a glutton, a drunkard and a friend of sinners (Luke 7:34). Where Finney was right, was that it was impossible to please sinners, where Finney was wrong, was that the sinners he was referring to, were the religious Pharisees, not the unbelievers. The same trend continues today, fueled by Gnosticism in the modern day Pharisee’s war against alcohol.

The Greek word used for wine in the New Testament is the word, “oinos” (Strongs G3631) which appears 33 times in the New Testament. It was this wine that the religious Pharisee of Jesus’ day accused him of being a drunkard with. It would be evident, that this accusation, though unfounded, would have no credibility at all, if Jesus had in fact not partaken of alcoholic wine during his ministry.

If there was a time Jesus should have spoken out about the inherit sinfulness of drinking wine, it should have been at the wedding of Canaan. Of course instead, we have the recording of Jesus’ first miracle which was to turned the water into grape juice. Again, given the lack of technology to keep the grapes from fermenting, coupled with a lack of refrigeration, there was no such thing as un-fermented grape juice.

The entire context of the miracle was centered around the celebrations of people who were well drunk on wine (John 2:10). The wine that Jesus created in the miracle account, was said to be of the finest quality (John 2:10). It would be hard to imagine, a celebration of people, enjoying alcoholic wine, to now shift gears and compliment the fine quality of this unfermented grape juice. The idea seems very alien to the narrative.

Some people, in their zeal for religiousness, have claimed that we never have accounts of Jesus Christ actually drinking wine, in the New Testament. While there is no explicit text to say that, there are many account that surely imply that he did, including the last supper where Jesus had communion with the disciples. The bread and the wine, a parallel of what was seen in the Old Testament with Melchizedek and Abraham (Genesis 14:18), were symbols of the New Covenant.

Now a few things to remember, the Communion was not a thimble of grape juice as we have in churches today, it was cup of wine. How do we know it was alcoholic wine? Simply from the example of what Paul taught the church he established about Communion. He delivered to them what Jesus taught him, about using bread and wine (1 Corinthians 11:23), and some of the church was getting drunk off the communion wine (1 Corinthians 11:21).

Why were they drunk, because they abused what Paul taught them and drank too much alcoholic wine. Why did Paul teach them to use alcoholic wine? Because that was what Jesus taught him to do and obviously that was what Jesus drank at the Last Supper. From these accounts we can see that Jesus and Paul both modeled responsible drinking, while the Corinthian Church modeled the abuses of it. Through this reasoning we can see that nowhere is drinking alcohol referred to as sinful.

Now the religious love to appeal to the Pauline verses about not causing your brother to stumble (1 Corinthians 8:13). While the religious love these verses to substantiate their Gnostic heresy, they seem to forget some details. Firstly, the topic of 1 Corinthians 8:13, is meat offered to idols, and says nothing of drinking. Secondly, even if you wanted to apply it to drinking, the question is, did Paul abstain from alcohol all together to keep his brothers from stumbling.

The answer is clearly, No. Every Church that Paul went to, he not only established communion, but was avidly a partaker with them. This happened not once a month, or once a week as we do in modern circles, but it happened as often as they met (1 Corinthians 11:26). So by all means Paul would abstain from something sinful if it meant his brother to stumble, and given the track record of the Churches Paul established, he obviously saw that drinking wine responsibly was not a risk to causing people to fall into sin. In fact we find the opposite to be true in Paul’s counsel to Timothy (1 Timothy 5:23).

While Prohibitionists focus on the verses that condemn or show the results of wrong alcohol use, they always neglect those verses that show there can be a proper moderate use. No one is denying that there are verses that show the abuses of wine, but again, the Bible does not warrant abolishing wine due to the possibility of abuse. Rather we are encouraged to enjoy our Union with God, unphased by the religious Gnosticism imposed by the Modern Day Pharisee, and all our lives to become a unique expression of Christ, through faith, rather than will power.

16 So let no one judge you in food or in drink, or regarding a festival or a new moon or sabbaths, 17 which are a shadow of things to come, but the substance is of Christ. 18 Let no one cheat you of your reward, taking delight in false humility and worship of angels, intruding into those things which he has not seen, vainly puffed up by his fleshly mind, 19 and not holding fast to the Head, from whom all the body, nourished and knit together by joints and ligaments, grows with the increase that is from God.

20 Therefore, if you died with Christ from the basic principles of the world, why, as though living in the world, do you subject yourselves to regulations— 21 “Do not touch, do not taste, do not handle,” 22 which all concern things which perish with the using—according to the commandments and doctrines of men? 23 These things indeed have an appearance of wisdom in self-imposed religion, false humility, and neglect of the body, but are of no value against the indulgence of the flesh.

Next: Part 3 – Drinking with the Apostlic Fathers and the Reformers