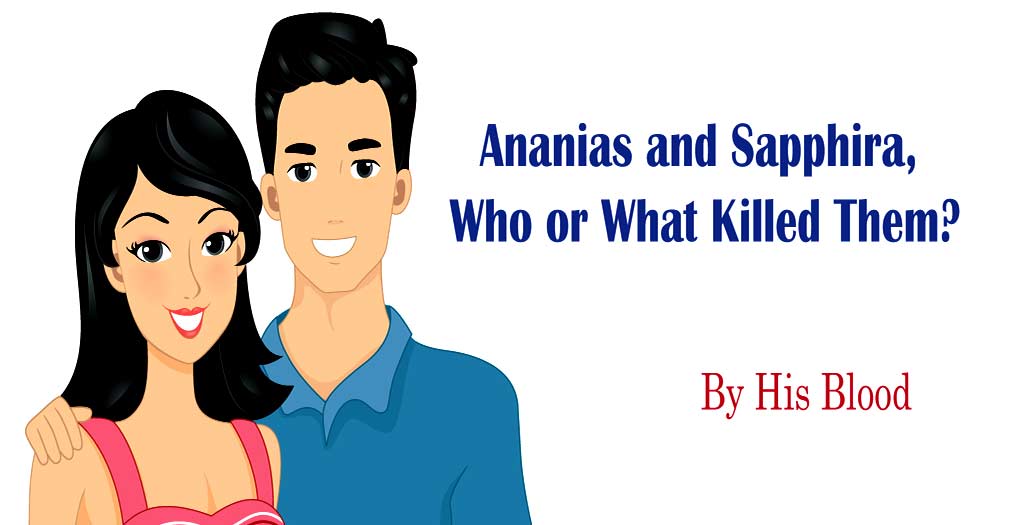 Who were Ananias and Sapphira?

Ananias and his wife Sapphira were members of the early Christian Jerusalem church. Their story is related in the Bible in the book of Acts chapter 5, where they died suddenly after lying to the Holy Spirit and the Apostles.

Many people struggle to understand the meaning of the story of Ananias and Sapphira, especially in terms of the grace of God. Some Grace preachers have suggested that they were not really believers, implying that in someway, it was okay to kill unbelievers.

Others have written extensively about how God had killed them, and how this was the way the Church will be in the future, obey or die.

Joseph Prince – The Truth About Ananias And Sapphira

No one knows for sure what happened. The best we can hope for is an explanation that fits the text and matches the character of God.

Ananias and Sapphira – The Story in Context

Acts Chapter 5 opens on the heels of the the Apostles witnessing throughout Jerusalem of the resurrection of Jesus and the coming judgement upon Jerusalem (Acts 2:16-20).

The 1st century Jews understood the warnings of Jesus. So they sold all that they had and cared for each other as a community. In the meanwhile they awaited the impending judgement if Israel’s leader didn’t repent (Matthew 24). This brings us onto the story of Ananias and Sapphira. They sold their possessions and kept some of the money (Acts 5:1-2).

At this time, Christianity was being preached to the Jews only (read: The Dividing Line in the Book of Acts). The revelation of the Gospel of grace had not yet been revealed to Paul and shared with the twelve. The Apostles were preaching Jesus, the slain lamb, in the context of the Law of Moses. Peter did not even know that the Gentiles were included until Acts 10. Even then, he is still conscious of the law when he entered the house of Cornelius.

Acts 10:28 And he said unto them, You know how that it is an unlawful thing for a man that is a Jew to keep company, or come unto one of another nation. But God has showed me that I should not call any man common or unclean.

So, Who or What Killed Ananias and Sapphira?

I want to focus on the verse that I believe offers insight into what happened.

Acts 5:5 And Ananias hearing these words fell down, and gave up the ghost. And great fear came on all them that heard these things.

What killed Ananias according to this passage? The words he heard from Peter killed him, that’s all we know.

Now, there is no way to know for sure what happened. In my opinion, Peter, under the power of Holy Spirit, had judged Ananias to be a liar and, being conscious of the law, the words he spoke killed him. A very literal interpretation of Proverbs 18:21 Death and life are in the power of the tongue.

Let’s read on to the account of Sapphira and see if anything gets clearer.

Acts 5:9 – 10 Then Peter said unto her, How is it that you have agreed together to tempt the Spirit of the Lord? Behold, the feet of them which have buried your husband are at the door, and shall carry you out.

Then fell she down straightway at his feet, and yielded up the ghost. And the young men came in, and found her dead, and, carrying her forth, buried her by her husband.

Again, the verse does not say what killed her. But, we see that Peter spoke what was going to happen, and it happened.

Jesus is not in the Business of Killing People

This account is much more befitting the character of Jesus. I’m reminded of the story where Jesus had just been preaching in a village that had rejected his words.

Luke 9:51-56 And it came to pass, when the time was come that he should be received up, he steadfastly set his face to go to Jerusalem, And sent messengers before his face: and they went, and entered into a village of the Samaritans, to make ready for him.

And they did not receive him, because his face was as though he would go to Jerusalem. And when his disciples James and John saw this, they said, Lord, wilt thou that we command fire to come down from heaven, and consume them, even as Elias did? But he turned, and rebuked them, and said, You know not what manner of spirit you are of. For the Son of man is not come to destroy men’s lives, but to save them. And they went to another village.

Jesus is not in the business of killing people to evangelize, much to the disappointment of his disciples. The account never says that they could not call down fire. It only states that Jesus rebuked them for their desire to do so.

The disciples and punishment

I believe if God’s character was such that he had to kill people who lied to him, as in the case of Ananias and Sapphira, we would have seen that manifested in the life of Jesus when the Samaritan village rejected him.

But what is evident from the above account is that the disciples had no problem with the idea of punishing those whom they thought deserved it and I believe that is what we see reflected in the Ananias and Sapphira story.

Andrew Wommack teaching about the Sovereignty of God

12 thoughts on “Why did God kill Ananias and Sapphira for lying?”