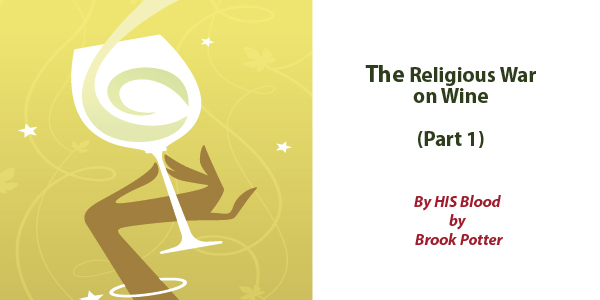 Genesis 14:18  And Melchizedek king of Salem brought forth bread and wine: and he was the priest of the most high God.

Greek Gnosticism permeates much of the church today. It is the idea of abstaining from natural pleasures in this world that God has given us to enjoy (1 Timothy 6:17), for the appearance of a more spiritual and holy life. Jesus Christ however, has completely wrecked that idea, by not only enjoying the natural pleasures of this world, but also carrying the indwelling Spirit of God while he did it, showing that one can be spiritual and also the life of the party.

The modern day Pharisee, blinding by the Gnostic heresy, has become transformed into the Fun Police among believers. In their eyes, a true believer should only find pleasure in explicitly Christian, religious, spiritual duties. They filled themselves with the knowledge of Good and Evil, and proceed to live a life based on doing the good, and not doing the evil.  Anyone who does not share in their behavioral standard, is usually labeled as compromised or lukewarm. What they often forget is that the same knowledge of Good and Evil is what got humanity into this mess in the first place, and could never be the source of the solution.  The solution is found in the other tree, the Tree of Life, which is a life lived in union with Jesus Christ and apart from the knowledge of Good and Evil.

This brings me to the subject of alcohol, to which many of the religious, choking on the fruit of the knowledge of Good and Evil, seek to influence believers to abstain from enjoying, and claim they have biblical grounds to which they can appeal. Ultimately, if there is anything sinful or beneficial concerning alcohol, we can be sure that the Bible will reveal it.

The Hebrew word for Wine, as used in the passage above, is “yayin” (Strongs H3196) and appears over 130 times in the Old Testament, to mean fermented wine, not grape juice. How do we know that it is fermented wine? Simply because the process to keep grapes from fermented, pasteurization, was invented by Thomas Welch in the 1890s as part of the temperance movement. Before this invention there was no such thing as unfermented wine.

Naturally fermented wine is between 10 percent and 14 percent alcohol.  Those who drank too much of it, got drunk, as was the case with Noah (Genesis 9:21), Lot (Genesis 19:30-36), and Nabal (1 Samuel 25:36), etc. Yet, despite the effects of excessively drinking wine, God commanded the Leviticus priests to take in a portion of wine as a drink offering unto the Lord (Exodus 29:40) with the sacrifices they received.

Also, God commanded his people that if they could not bring their tithe (food harvest) to the temple, they were to sell the food for money and buy whatsoever their heart desired, including wine and strong drink, and celebrate, as long they invited the local Levitical priest to the party.

Thou shalt truly tithe all the increase of thy seed, that the field bringeth forth year by year. And thou shalt eat before the LORD thy God, in the place which he shall choose to place his name there, the tithe of thy corn, of thy wine, and of thine oil, and the firstlings of thy herds and of thy flocks; that thou mayest learn to fear the LORD thy God always. And if the way be too long for thee, so that thou art not able to carry it; or if the place be too far from thee, which the LORD thy God shall choose to set his name there, when the LORD thy God hath blessed thee: Then shalt thou turn it into money, and bind up the money in thine hand, and shalt go unto the place which the LORD thy God shall choose: And thou shalt bestow that money for whatsoever thy soul lusteth after, for oxen, or for sheep, or for wine, or for strong drink, or for whatsoever thy soul desireth: and thou shalt eat there before the LORD thy God, and thou shalt rejoice, thou, and thine household, And the Levite that is within thy gates; thou shalt not forsake him; for he hath no part nor inheritance with thee. At the end of three years thou shalt bring forth all the tithe of thine increase the same year, and shalt lay it up within thy gates: And the Levite, (because he hath no part nor inheritance with thee,) and the stranger, and the fatherless, and the widow, which are within thy gates, shall come, and shall eat and be satisfied; that the LORD thy God may bless thee in all the work of thine hand which thou doest.

Some may argue, that there is another word used for wine in the Old Testament, which is the word, Tirosh (Strongs H8492), which is often described as new wine. It is found 30 or more times in the Old Testament, and many would have you believe that this was grape juice.  Apart from the lack of science to produce said grape juice, it also stands contrary to the counsel of Scripture. Hosea records that both, old wine (yayin) and new wine (tirosh) can take away one’s understanding (Hosea 4:11). Evidently, grape juice is not up the task as described by Hosea, that effect can only be achieved by the presence of alcohol.

Thus far, we can see from the counsel of Old Testament Scripture that there can be both good uses and abuses of wine, it should be noted there is no mention of drinking wine related to anything particularly sinful. While the Bible makes clear that God gave wine to make men glad (Psalms 104:15).   Some people may point to Proverbs 31:6-7 as one of the potential abuses of alcohol, but when we read the passage, we would see that strong drink and wine is offered as a remedy,  to the person’s misery.  The strong drink and wine are not the cause of the poverty and misery of the person, at least in the context of these verses:

Proverbs 31:6-7  Give strong drink unto him that is ready to perish, and wine unto those that be of heavy hearts.  Let him drink, and forget his poverty, and remember his misery no more.

There are many who would want to reinterpret these passages in favour of the potential abuses, to justify a self righteous abstinence from alcohol.  The problem with their argument is that the same abuses can be said about food, and it’s potential to lead to gluttony, and yet, we see no campaign to abstain from food.  While some would say that food is necessary for life, and wine is not, would be case of special pleading.  Some of us have eaten food that has made us ill because it was not properly prepared, and caused some form of food poisoning.  Would we then argue that eating food that made us sick, is sin?  I don’t believe that is so.  In the same fashion just because drinking alcohol has potential dangers doesn’t make it sinful.  Both can be abused, just as both can also be enjoyed responsibly with a little help from the often forgotten fruit of the Spirit, called Self Control (Galatians 5:22-23).

In the Words of Martin Luther, “Do not suppose that abuses are eliminated by destroying the object which is abused. Men can go wrong with wine and women. Shall we then prohibit and abolish women? The sun, the moon, and the stars have been worshiped. Shall we then pluck them out of the sky?”

For the Modern Day Pharisee, where religious right and wrong is more important than the power of a life lived and enjoyed in union with Jesus Christ, there is no middle ground. In their religious mind, wine cannot be drunk responsibly and they deny spiritual fruit of self control. Wine is evil, drinking it is a sin, and therefore they do not drink it, and they try to impose their way of thinking on everyone else. Of course, in their effort to be religious, not only do they stand against the counsel of the Old Testament, but they are throwing out some of the important people of Christian faith, including the Apostle Paul, the early church, the reformers and Jesus Christ himself, all of whom both drank alcohol responsibly.

We will examine the New Testament and other sources of church history on subject of wine in the coming parts.

1 thought on “Part 2 Alcohol series – The Bible and alcohol, is it a sin?”