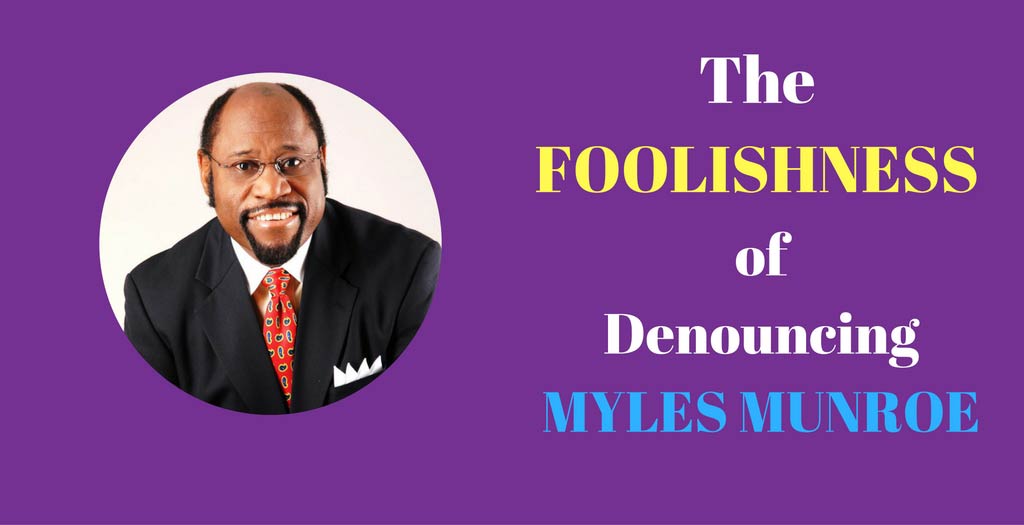 Pastor Myles Munroe passed away in a tragic accident, involving the death of nine people, including Dr Myles Munroe and his wife Ruth.

Personally, I am not familiar with much of his teachings or ministry. But I have tremendous respect for a man who has dedicated himself to ministering to others. Even if we may disagree on many matters, he did great work with what he understood and believed.

But all too often, the dark reality of Christianity has raised it’s head. Our fruit of reducing the Gospel to a “get out of hell free” card, has spawned a mountain of heresy hunters seeking to spread their gnostic heresy of salvation by doctrine. And they have taken sight on Myles Munroe and his teachings.

Many have concluded, that for no other reason apart from they do not agree with him, or do not understand him, they see the need to declare him a false teacher, and some have gone so far as to say he’s in hell.

See: Some Denounce Myles Munroe as a “False Teacher”

Thanks to these Gnostic Christians, they have once again tarnished the Good News of Jesus Christ with their narrow mindedness.

These heresy hunters, so blinded by the deceitfulness of sin, attack one of our own. In so doing, they show the world that Christianity is not about love and acceptance. But rather it’s a shallow, hypocritical religion.

Imagine how the unbelievers, with no Christian understanding, must think of these attacks? They must think, “If Myles Munroe can’t make it, there is no hope for anyone else!”

Did Myles Munroe deny Christ in his preaching?

So what has all these heretic hunters up in arms over Myles Munroe? They believe that Myles Munroe denies Christ in his preaching, simply because he has been quoted as saying, “Our Good News is not About Calvary.

That is a big heresy that everyone is condemning Myles Munroe to hell for. In the mind of the religious, what was said above is synonymous with “Not Preaching Jesus.”

In other teachings, Myles Munroe talks about how we do not share about the blood of Jesus with unbelievers, because they do not understand our Christian culture. Rather we should share about the inheritance we have in the Kingdom.

This also drives our heresy hunters crazy, because they are so myopic in their vision. Unless something explicitly has the name Jesus, they wouldn’t know what anyone is talking about.

Talk about the Kingdom FIRST

The irony of course, is that Myles Munroe NEVER suggested that the Message stopped there. Neither does he suggest that we never talk about Jesus.

He always said, that we talk about the Kingdom FIRST, and THEN talk about how this was achieved in the Finished work of Jesus. But the Heresy Hunters have usually switched off the videos before they can hear that part. And therefore it never gets mentioned.

If you listened to the Sermon above, you will hear at the 25th minute the part where Myles Munroe says that the second part of evangelism is to share the Lord Jesus, after we share about the Good News.

Myles Munroe does not deny Jesus

There is no denial of Jesus Christ in Myles Munroe’s preaching. That only exists in the minds of heresy hunters who don’t listen.

Myles Munroe, in my opinion, is absolutely correct. Contrary to the heresy hunters, he does not deny Jesus. Rather he does exactly what Paul did when talking to the Athenian pagans on Mar’s Hill.

Paul used their superstitions and poets to share the Good news of our Inclusion into the Family of God.

Acts 17:28  For in him we live, and move, and have our being; as certain also of your own poets have said, For we are also his offspring.

No, of course not. Paul is wise in using what the culture was familiar with to draw their interest, where some men inquired more about these matters (Acts 17:34). It is in those settings, we can assume Paul shared about Jesus Christ.

This kind of reaction is common among the immature believers who need everything spelt out to them.

Teaching to the babes

They are babes, unskilled in the word of righteousness. Therefore they cannot discern good and evil, without someone spelling it out to them plainly in simple words.

Hebrews 5:14 But strong meat [Maturity] belongeth to them that are of full age, even those who by reason of use have their senses exercised to discern both good and evil.

I remember the first time I told someone that Jesus didn’t preach the Born Again message as we preach it. They slammed me for it, and demonized me. But the truth was evident, Jesus never went around teaching that he died and rose again on the third day.

As with them, and with many today who have fallen for the gnostic heresy of salvation by doctrine, they are so afraid of going to hell by getting teachings wrong, they attack anything different.

And unfortunately Myles Munroe’s legacy and family must endure the fruits of that fear from the very ones who claim to be our brothers and sisters.

96 thoughts on “The Foolishness of Denouncing Myles Munroe”