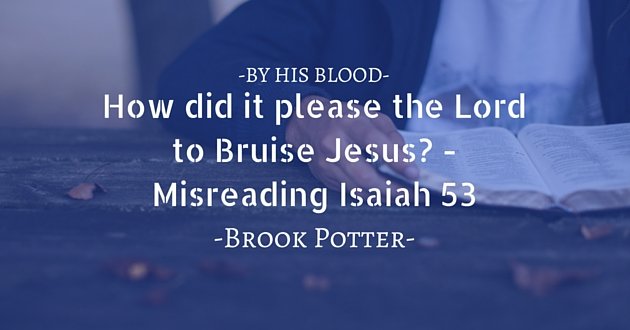 Isaiah 53:10  Yet it pleased the LORD to bruise him; he hath put him to grief: when thou shalt make his soul an offering for sin, he shall see his seed, he shall prolong his days, and the pleasure of the LORD shall prosper in his hand.

It may surprise many people to learn that there are different views of the atonement of Jesus Christ. The most popular view, Penal substitution, is a distinctively Protestant understanding and it differs from both the Roman Catholic and Eastern Orthodox understandings of the atonement. There is great debate as to if any of the Church fathers supported this view. However, many can trace its origin to Calvin, but it was more concretely formulated by the Reformed theologian Charles Hodge in the 18th Century.

While I do not necessarily agree with many aspects of Penal substitution, I do recognize Jesus Christ as being sent to the Jews first, and his role as the Lamb of God under the Jewish Law. While I do not agree that the sacrifice was to appease God in anyway, I do believe the Sacrifice was to satisfy the demands of the Law that the Jews lived under, that it may be fulfilled.

Galatians 4:4-5  But when the fullness of the time was come, God sent forth his Son, made of a woman, made under the law, to redeem them that were under the law, that we might receive the adoption of sons.

In my years of study, I have since come to understand and promote the “Christus Victor” view of the atonement. The “Christus Victor” view is more aligned with the Roman and Eastern Churches. It views the work of Jesus Christ as destroying the powers of Sin and Death, resulting in the permanent union between mankind and God and leading to the restoration of all things. Many have coined this as the “Undoing of Adam” atonement.

The number one reason people object to the “Christus Victor” view of the Atonement, is because of a misunderstanding about a messianic prophecy recorded in Isaiah 53. Two verses in particular that has led many people to assume that God poured out his wrath upon the Son, in support of Penal Substitution.

The first verse is Isaiah 53:4  Surely he hath borne our griefs, and carried our sorrows: yet we did esteem him stricken, smitten of God, and afflicted.

Some would quote this verse saying that this is clear evidence that Jesus Christ, who is the subject of this prophecy, was “Stricken, smitten of God and afflicted,” this implying God punished Jesus for our sins. But, as with all religious mindsets, they always quote half a verse. The whole sentence says “ yet we did esteem him stricken, smitten of God, and afflicted.”

Isaiah 53:5  But he was wounded for our transgressions, he was bruised for our iniquities: the chastisement of our peace was upon him; and with his stripes we are healed.

This verse shows what is really going on, as compared to how we thought it was going on. We believed he was being punished by God(verse 4), but the truth was, through this work that looked like punishment, there was actually healing taking place (verse5).

The other verse in question is Isaiah 53:10  Yet it pleased the LORD to bruise him; he hath put him to grief: when thou shalt make his soul an offering for sin, he shall see his seed, he shall prolong his days, and the pleasure of the LORD shall prosper in his hand.

This verse doesn’t say anything about God actually doing any punishment or bruising, it says God bruised Jesus by putting him to grief. In other words, the way Jesus was put to grief was by allowing humanity to beat and afflict his Son! Allowing Jesus Christ to suffer under the full weight of mankind’s sinfulness and rebellion, even unto death by our hands, is how God put Jesus to grief. What happened as a result of that decision by God, ultimately resulted in the fulfillment of God’s plan to redeem the creation, and that was pleasing in God’s sight.

While at first glance these verses appear to be in support of Penal Substitution, they can just as easily be interpreted in another way that allows for the support of the Christus Victor view. While these are not the only two views on the atonement, these are two most popular. Whatever view of the atonement we decide to believe, will lead each of us to a different view of the Father, and the nature of how we relate to him and each other.

14 thoughts on “How did it please the Lord to Bruise Jesus? – Misreading Isaiah 53”