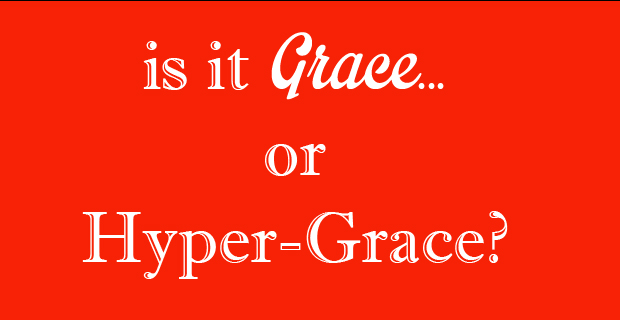 For the first few months of this year, there has been a tremendous outcry from many preachers over something they have called, “Hyper-Grace.” More and more people are coming out against this new teaching that has overrun the body of Christ.

Those of us who preach Grace, sit up and listen to what these ministers are calling “Hyper-Grace.” So far, everything we have heard about the Hyper Grace movement is completely new to us. Apparently, there is a group of people out there preaching that sin is okay, that you don’t need to repent or confess, that you don’t need to do anything because it’s all grace and you can just be lazy and do nothing, and that you can go on living in sin all you want all to the Glory of Grace.

At this point we Grace Preachers are fired up, and want to know who could possibly be preaching such nonsense, and we are ready to join the Charge against such heresy! We sharpen our pitchforks and light our torches as we get ready to join the mob and bring an end to this evil! Then all of a sudden, the shoe drops, and we realize these ministers are accusing us, Grace Preachers, of preaching these things.

Articles are written, books are published, YouTube gets constipated with videos all denouncing a message that no one is preaching. Labels like, False Grace, Hyper Grace, Extreme Grace all get thrown around like caution signs. Christians get on alert, and they read their favorite blogs to find out who they should no longer like, and offer up themselves as champions for the cause to tear down such evil. Only problem is, this supposed “hyper-grace” message doesn’t exist, and no one is preaching it.

Straw man after straw man is erected and torn down over and over again. While most of us move on to work with churches and remain mostly uninterested in the mobs attempts at fighting imaginary foes, a few Grace preachers may make a solemn attempt to save them from their embarrassing behavior and actually offer to explain what real Grace is. Even though we have never preached those things we have been accused of, there is no account for what the mob thinks they heard us say, which is always more fun to start a riot with. Perception is far more fun that reality.

Usually, these lessons don’t go unpunished as the warrior mindset of the mob diverts their attention back to rioting against a new Straw Man, erected on the first attempt of an explanation of the message of Grace. I mean… Who needs context and audience relevancy, when you’re on a crusade against something that doesn’t exist and for all intents and purposes, you appear to be winning! Beside, the mob doesn’t need to listen to Grace Preachers that are so deceived that nothing we say can be taken seriously, so instead they’ll just make up stuff about what we believe. In the unlikely event we actually say something the mob agrees with, they claim we have changed our position, rather than admit their ignorance to the message of Grace and admit that we have been preaching that all along.

The Grace message, the Real Grace message, really is flooding the Church and it is nothing like what these people are claiming we preach. Even if they happened to find some fringe element out there that is actually preaching what they thought all along, that doesn’t mean the rest of us do. To learn something new, one must be humble enough to admit they don’t know something, and its just easier to fight imaginary monsters than to do that! And punching the wind also has another benefit, it means you never have to admit that you were wrong.

Also see my post about How the Religious Mind Interprets Grace.