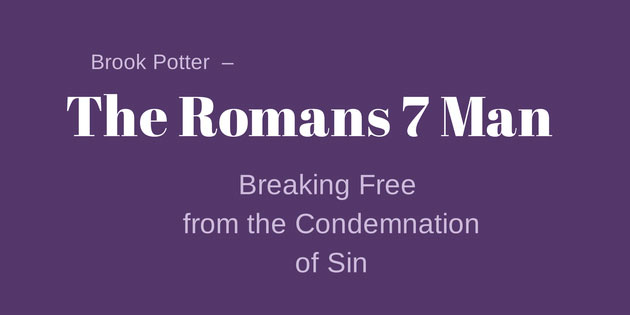 “Most Churchgoers are duped into believing that there’s a constant war waging within the individual Christians between the Holy Spirit and the “lust of the flesh.” Because they have misread Romans 7.” – John Crowder

Romans 7 is one of most misunderstood passages of scripture, that has locked believers into the notion that there is still a present day struggle against the flesh, and against sin. But when Paul writes that in the preceding and following chapters about how we are dead to sin, we must question the context of chapter 7, and the struggle thereof.

The very first verse of Romans set the audience, Paul is speaking to the Jews, who are those who know the Law (Romans 7:1) Paul explains how they have been divorced from the Law to now be married to Christ (Romans 7:2-4). Paul then expands in the past tense about the time the Jews were still sinners under the Law, and how in vain they tried to do what was right. (Romans 7:5-6)

Paul stresses that the purpose of the Law was to lead us to Christ, and that God did not save us to send us back to the Law, rather the goal was always to be found in Christ. The law was an external guide until the Holy Spirit could abide in us and direct us internally. Paul makes it abundantly clear that there has been a change in our relationship and covenant with God.

Finally Paul begins to talk about his time under the law, in the historical present tense. He is talking hypothetically to make a point. His point is that, while still under the law, the Law of God only serves to provoke sin. It only showed how sinful Paul really was before he came to the knowledge of Christ.

How do we know this is Paul’s discourse before he came to the knowledge of Christ? Simply by examining the context of the passage. All throughout Romans 6 and onto Romans 8, Paul gave an elaborate description that we are no longer slaves to sin, our carnal nature is dead, we are now in the Spirit. Yet in the Romans 7, he says that he is carnal. The only way this makes sense is to understand he talking about his pre-conversion experience.

Further, when Paul describes the struggle against sin, he says that sin is present in him (Romans 7:17, 20). He then talks about using the Law as the solution to sin rather than the Holy Spirit (Romans 7:21-22). Most of all, The Holy Spirit is absent from within him to empower him to do what is Good, (Romans 7:18).

This is all talking about people under the Law, and ultimate futility of works righteousness. He then poses a hypothetical question for the unbeliever trapped in this dilemma, Romans 7:24  O wretched man that I am! who shall deliver me from the body of this death?

Paul then presents the marvelous solution: the Romans 7 man, put faith in God, be saved and you will be set free from this vicious cycle of sin.

Romans 7:25,8:1  I thank God through Jesus Christ our Lord. So THEN [Before Salvation] with the mind I myself serve the law of God; but with the flesh the law of sin. There is therefore NOW [After Faith in Christ] no condemnation to them which are in Christ Jesus, who walk not after the flesh, but after the Spirit.

Romans 8:7 – 9  Because the carnal mind is enmity against God: for it is not subject to the law of God, neither indeed can be. So then they that are in the flesh cannot please God. But ye [Believers] are not in the flesh, but in the Spirit, if so be that the Spirit of God dwell in you. Now if any man have not the Spirit of Christ, he is none of his.

Thanks be to go God, that we no longer battle against our flesh, that our old man has been co-crucified with Christ, and we live this life by faith in the Son of God, not fighting the wind of things that are not there.