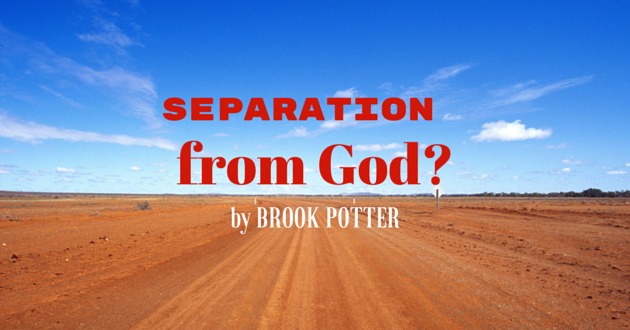 The greatest challenge for the Western Church is the Greco-Roman mindset, that we try to filter all of Scripture through to get our understanding. The problem is the Scriptures were not written with a Greco-Roman mindset, they were written with a Jewish mindset. This single distinction has created a world view, and many theological ideas, that’s simply not supported in Scripture.

One of the biggest ideas in the Western Church from the the Greco-Roman mindset is the idea of separation from God. This is one of the biggest heresies that has come into the Church, the concept of dualism. The idea that there are two forces in existence, and that a person can be a part of one, at the exclusion of the other. Dualism is responsible for concept like, hell is eternal separation from God, or some people are IN Christ while others are not.

This single concept has given rise to the idea of Secular and Sacred things in the world, and the us-versus-them mentality of believers. Worst of all, this idea has forced a concept of God that only exists within the confines of acceptable Christian culture. It is a mindset that says God is in the worship music, the Churches and the crusades, but God doesn’t exist outside all those safe, sanitized arenas. And if someone sneezes at an inappropriate moment, God will flutter away like a startled dove, leaving us to fend for ourselves.

The Jewish mindset, on the other hand, believes God holds existence together. The Scriptures do not teach separation from God in any fashion. King David made a point that even in hell, God was there (Psalms 139:8). The Apostle Paul stressed that everything that exists, is held together by God (Colossians 1:16-17). If something could have self-existence, that something would have independent life, and that would make that entity a god in and of itself.

Unlike the startled dove impression of God taught by the Western Church, the Scripture says that God is completely unthreatened by darkness. Where the Western Church believes that Darkness and Light cannot coexist, we see that the Light of Christ is said to shine in the darkness (John 1:5), and he sees no difference between the two.

Paul further explained, while preaching to the unbelieving Athenians, that our life, movement and existence is in God, Acts 17:28  For in him we live, and move, and have our being; as certain also of your own poets have said, For we are also his offspring.

1 John 1:3  That which we have seen and heard declare we unto you, that ye also may have fellowship with us: and truly our fellowship is with the Father, and with his Son Jesus Christ.

Again, everyone is in Christ, but not everyone knows it, believes it or has fellowship with Christ, unto salvation.

Even on the subject of hell, (see What’s up with Hell?) on which there are many views, the Scriptures do no teach separation. Rather it teaches that the presence of the Lord brings both joy and refreshing (Acts 3:19, 1 Thessalonians 2:19), as well as destruction and torment (2 Thessalonians 1:9, Revelation 14:10).

The Eastern Orthodox Church holds that heaven and hell are both the same place in the presence of God. For the lovers of God it is bliss and pleasure, and for the haters of God is it fiery torment. While the nature of hell is up for debate, it’s clear that the Greco-Roman teaching of separation from God is unscriptural.

John Crowder showing that Separation from God is an Illusion.