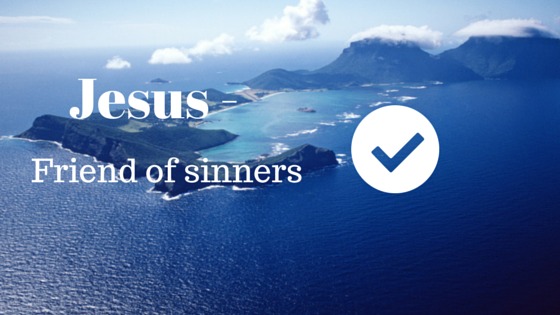 “The Son of man is come eating and drinking;
and ye say, Behold a gluttonous man,
and a winebibber, a friend of publicans and sinners!”

When we read the Gospels, we learn a very important truth about the ministry of Jesus. It was not the sinners that persecuted Jesus, it was the religious. In fact, the sinners loved him and wanted to make Him their King (John 6:15). Jesus ate food with sinners, drank with sinners and had real friendships with them. If we are to walk as Jesus walked, people should see at least some similarities between you and Christ.

Contrary to popular teaching, God’s holiness is not threatened by sin. Jesus, who is the express image of the Father, was able to build relationships with sinners and He was obviously not offended by the lifestyles of the prostitutes and adulterers he spent time with. In fact, the only person who really got a hard time from Jesus, were people who thought they knew God.

Robby Dawkins once had a dream from the Lord, that he spoke about in a movie called “Furious Love,” that helps illustrate my point. He said he was in a church that was full of gang-bangers, prostitutes and drug dealers. And they were doing everything wrong, they were selling drugs in the church, having sex in the pews, and all manner of mayhem, while Robby was banging on the pulpit trying to bring order.

At one point, Robby got so mad, he shouted out that if people were not going to act right, they could just get out of the church. At that point in the dream, God said to him, “Why would you send away what you have been asking for?” Robby retorted to the Lord, “But Lord, I never asked for this!” To which the Lord responded: “Yes you did, you asked me for the lost. Now love them, and let ME change them.”

When God wanted to reconcile a dying world to Himself, He did it, by not counting men’s trespasses against them (2 Corinthians 5:19). That is the heart of the Gospel, that men have been forgiven, reconciled and loved, even when they were sinners before God (Romans 5:8, Colossians 2:13). How else will the lost hear this wonderful news, if the only people we speak to, and spend time with, are believers?

What if God is not who we think He is?