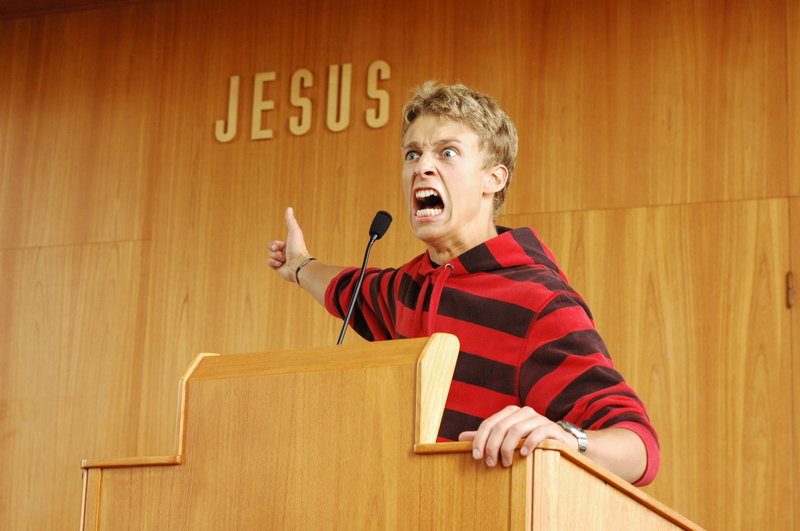 There are many accusations that come against the Gospel, none of which are new. One of the most common ones, is the matter of Repentance. The reason law teachers are so obsessed with repentance, and making it all about feeling bad and sorry for your sins, is because their message really does not have an answer to sin. Law preachers need people to feel bad and guilty for sin, because without it, there is no other incentive to keep people from sin, other than trying to get them to avoid the pain and guilt.

Upon learning that a person has given into some form of sin, the law preacher always comes back to repentance from sin, because they want the person to feel bad about what they have done to try to curb the behavior. When that doesn’t work, they step it up, and say, well you need TRUE REPENTANCE, because obviously you didn’t really mean it the first time.  Now, you must really mean it from your heart! Again, this is trying to invoke an emotional condition to avoid sin. This is just another way of saying, you must clean yourself up, because the law preacher doesn’t really have faith in Jesus to do it for you.

When the behavior continues, they step it up even more, and say, well maybe you are not a real christian, or never really got saved in the first place.  In other words, you are in danger of hell fire if you don’t change. Eventually, the person will bluff, and fake that their problems are solved, and simply pushing the behavior into hiding.  They are no better off than they were before, but because of these false teaching ideas, and fear of losing their salvation and possibly fellowship with others, they act the part, while being heavy with burden and labour on the inside.

This type of ministry is no different from negative reinforcement to force a person to change their behavior by their own will power. The procedure may sound spiritual, but the Gospel message of being dead to Sin, or having Faith in the New Nature of Christ in you is completely void from the conversation. Even in the event the person does mention these truths, the mixed messages is powerless to do anything. For real Change, a person must trust Jesus alone.

So when Believers examine the truth of the word repentance, the law preacher panics! It’s the only game in town for the law preacher, who has no real faith in the new Identity Christ has given us, in his self appointed war against sin. So he must tear down anything that he thinks will weakens his only tool to deal with sin through fear and condemnation. The more aggressive that Law preacher fights, the greater their unbelief and their insecure need for control.  This is usually followed by some speech about how little the Preacher sins as some standard of the Christian walk, taking the place of Christ.  Every chance he gets, the law preacher, will always remind people of their need to share in his delusional war against sin, because that is now the true heart of such a church.

So what should we really preach about Repentance? I’ve done a great study of the Greek word as used through the ages, where I show simple, repentance does not necessarily have to do with feeling guilty or bad about one’s sins. The proper use of the word is a Change of Mind. While it does not explicitly have to do with sin, it can be related to sin, because the only reason we sin, is because we believe some sort of lie (John 8:32 ).

Repentance, or changing our mind about that lie, will naturally result in a change of behavior. Again, repentance does not have to do with sin, as one can repent of their view of God as they grow in their relationship, or about a subject of the Supernatural, or End times. All of these are legitimate areas of Repentance, and we will continue to grow and learn and remain in that state of constantly Renewing our minds, in this life. Sin is no longer an issue of nature, rather it is a choice, and foolish one with consequences in this life.

What about Repentance unto salvation? Well of course, it is not about feeling bad about all your sins that saves us, rather it is belief in Jesus Christ where once there was ignorance or unbelief. That is a change of mind, that will lead to a subjective faith in Christ. We change our mind about who Jesus Christ is, and what He has done for us. Confession of sins and the other feeling associated with the Christian life are a by-product of salvation experience, they are what happen after we believe, they are not the price tag to get these benefits.

The other subject that Law Preacher cannot give up on is the subject of Hell. It is their ultimate scare tactic to get people to buck up and live right without faith in Jesus. Rather than preaching that we have been sealed to the day of Redemption, they emphasize how the Road is Narrow out of context, and we can lose our salvation though excessive sin. For the Law preacher, you are never on a sure foundation, you always appear to be a hair’s breathe away from the abyss. The Rapture teaching is used in a very similar manner.

So what should we preach about hell? Among the Gospel preachers there is debate. I myself hold to a very eastern view of Hell. The one thing the real Gospel of Jesus Christ has against the Law Preacher’s version, is that Hell is very difficult to get into and you cannot sin your way there. The Grace preacher understands that Jesus Christ is the way, the truth and the life. The Father, not wishing any to perish, included all humanity in Christ as he walked through the narrow gate and along the narrow path for us all. Where the Law preacher sees exclusivity and ways to keep people out, the Gospel of Jesus Christ gives us inclusion and hope for all humanity.

We understand that salvation has nothing to do with us, we are not holding onto God, rather God is holding onto us, and none can pluck us out of His Hands (John 10:28). We can rest in the security of the past work of Jesus Christ; that nothing we  do, can undo what Jesus has already done for us.  Our response is to agree with what he has done or not.  The Gospel and the Love of God invokes a sense of Hopeful Universalism, as it is reflected in the nature of God that we are joined to (2 Peter 3:9).

I’m reminded of the story of King Saul, at the end of his days. He went to visit a medium to invoke the spirit of Samuel the Seer to gain insight into what to do concerning a imminent battle. We all remember the Story (1 Samuel 28:15 – 19). Now remember, Saul had all but rejected God, and was now involved in some forbidden witchcraft to conjure Samuel. By Samuel’s own words, God had Departed Saul, and had become his enemy (1 Samuel 28:15-16).

The next part of the Story is very much what we all agree with, that there are consequences to Sin. As Samuel goes on to explain because of what Saul has done, the Kingdom was ripped away from his hands, and that Saul and his sons were going to die the next day (1 Samuel 17-19). Rightly, under the old covenant, the penalty for sin was death. Saul was going to pay for what he had done.

But in the hint of this judgement we often miss the words of the Prophet that shed a remarkable light on the nature and Character of God. Samuel says of Saul and his Sons; “and to morrow shalt thou and thy sons be with me.” (1 Samuel 28:19). Yes, Saul and his Sons were going to die, as was the rightful punishment of the Law, Physical death.  Yet, look at the faithfulness of God towards Saul and his Sons, a man who rejected God and engaged in heavy witchcraft, he was going to be where Samuel was.

The Law preacher may try to insert hell into the dialogue, but it is noticeably absent from the text. All we know for sure, is that Saul and his sons ended up wherever Samuel was. Depending on our view of God and his nature, will determine how we end that story. I’ll leave that for people to decide for themselves.