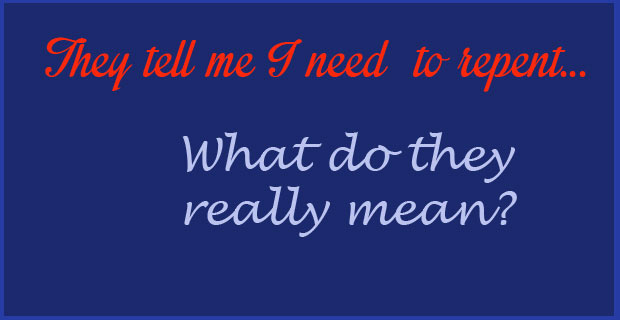 “We live in repentance, a constant state of renewing the mind to that fact that our mind is renewed” – John Crowder

The word Metanoia, is the Greek word, for Repentance. Few words have ever caused more controversy and started more arguments. In fact, repentance has become such an untouchable idol in the church, that few would even examine its meaning to see if what we have been taught is true or not. It’s almost like a drug in the Church, that you can paint the most beautiful picture of God’s grace, love and his generosity, as long as it is only reserved for those who spend hours in knee bruising. navel gazing, snot-dripping repentance.

If we study a brief history of the use of Metanoia in the early church, we see a multitude of conflicts and strife. The Latin Fathers translated the New Testament words metanoeo and metanoia to reflect the Church’s theological traditions of the time. They translated those terms as poenitenitam agite and poenitentia, “to do acts of penance” and “acts of penance,” respectively. Their translations are part of the Latin Vulgate versions of the Bible. It was not until Martin Luther and John Calvin that those translations were given a serious and widespread challenge.

John Calvin, and to a lesser degree Martin Luther, believed that all of one’s sins were forgiven when a person became a Christian. Such teaching clearly marked a radical break from Church tradition at the time. The Church at the time, was in a panic. What would become of Church traditions of confessing one’s sins to a priest and performing the mandated acts of penance? Logically, it would cease in churches which adopted the thinking of the Reformers on forgiveness of sin. As we know, that is exactly what happened.

In contrast to the Church’s definition of metanoia as involving contrition, confession, and the performance of acts of penance, Calvin and Luther concluded that it retained its classical sense of “a change of mind.” Repentance unto salvation, according to Calvin and Luther was a change of mind whereby one recognized his own sinfulness and need of forgiveness and then turned to faith in God to provide that forgiveness because of Christ.

From that time, both the Roman interpretation and the Reformer’s understanding of Metanoia have continued, but we also see the introduction of new definitions. Such as the popular charismatic view that Metanoia means “Turning from sins.”  Those that holding to this view consider the repentance and faith required to be saved, to be the actual turning away from one’s sins and not merely a willingness or intention to do so.

What this definition really means is an alcoholic, for example, in order to become a Christian, he would first have to stop getting drunk to be considered “true repentance.” If repentance and faith is required for salvation, and repentance means to turn away from one’s sins, it amounts to nothing more than clean yourself up FIRST, then believe and then you’ll be saved. We can see the obvious problems with this understanding of the word Metanoia.

Further, others argue that Metanoia means that one needs to at least be willing to turn from one’s sins. They would tell an alcoholic that in order to become a Christian he would first have to be willing to stop getting drunk. They would stop short of saying that he actually had to stop drinking before he could be saved.

People holding to these first two views might stress to varying degrees the need to be sorry about one’s sins and to commit oneself to the Lordship of Jesus Christ. The biggest challenge to these views comes from the Bible itself, and the 11 or so recorded times when GOD Repented;

Jonah 3:10 And God saw their works, that they turned from their evil way; and God repented of the evil, that he had said that he would do unto them; and he did it not.

Exodus 32:14 And the LORD repented of the evil which he thought to do unto his people.

1 Samuel 15:35 And Samuel came no more to see Saul until the day of his death: nevertheless Samuel mourned for Saul: and the LORD repented that he had made Saul king over Israel.

2 Samuel 24:16 And when the angel stretched out his hand upon Jerusalem to destroy it, the LORD repented him of the evil, and said to the angel that destroyed the people, It is enough: stay now thine hand. And the angel of the LORD was by the threshingplace of Araunah the Jebusite.

Jeremiah 26:19 Did Hezekiah king of Judah and all Judah put him at all to death? did he not fear the LORD, and besought the LORD, and the LORD repented him of the evil which he had pronounced against them? Thus might we procure great evil against our souls.

Amos 7:3 The LORD repented for this: It shall not be, saith the LORD.

Amos 7:6 The LORD repented for this: This also shall not be, saith the Lord GOD.

Is sin an option for God? Does God need to turn from sin or be willing to turn from sin to repent? Of course not. Martin Luther and John Calvin’s definition of Metanoia to mean “Change of Mind,” is the only definition that would fit with the Biblical record. If a person must give up something or even be willing to do so to obtain salvation, then it is not really a free gift. If one must live an obedient, sinless life to keep salvation, then it is conditioned upon faith plus works, and grace is nullified. I think the testimony of Scripture demonstrates that the change-of-mind-secure-salvation view is the biblical one.

6 thoughts on “By His Blood – Metanoia (Repentance), Renewing the Mind and Your Salvation”