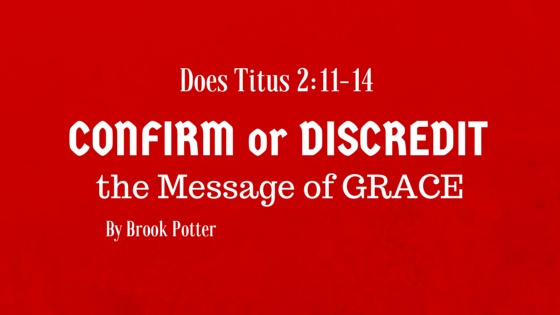 “The Law preacher thinks Titus 2:11-14 discredits the message of Grace, but it only exposes their own unbelief in Jesus Christ.” – Brook Potter

The true god of the modern Pharisee, is sin. There is nothing that can be said to get them to believe in the Jesus of the Scriptures, and to forsake their favorite idol. The Pharisee continues to throw out biblical interpretation that contradict their understanding, all for the sake of holding onto their hopes of self righteousness.

As I’ve preached the message of the Finished Work, I’ve had to confront many of the difficult passages of Scripture that appear to contradict our forgiveness, adoption, and inclusion into the Trinitarian life. I’ve had to explain the audience-relevance of passages in the Book of Acts and 1st John  that appear to contradict our forgiveness. I’ve tackled Issues of Wrath, and the apparent contradictions between Jesus and Paul, by showing the dividing line of the Cross.

After swatting the host of objections, the Pharisee always defaults to one scripture that they all take out of context. That Scripture is their last stronghold in their claims to their legalist beliefs.

Titus 2:11-12 For the grace of God has appeared that offers salvation to all people.  It teaches us to say “No” to ungodliness and worldly passions, and to live self-controlled, upright and godly lives in this present age…

Every modern day Pharisee in the world, always quotes this passage as some kind of argument to discredit the Message of Grace and try to convince people to join their crusade against sin. The problem is, this passage of Scripture affirms God’s message of Grace, and does nothing to negate it. If a Legalist is quoting this to disprove the message of Grace, they obviously don’t understand what Grace is, nor do they understand that the New Covenant was God’s Idea.

Firstly, the modern Pharisee loves to quote this verse from the NIV, because it suggests that salvation is only offered to all men, instead of actually been manifested to all men, as other translations have said.

Titus 2:11 Young’s Literal Translation (YLT)  For the saving grace of God was manifested to all men…

This verse actually disarms the Pharisee from saying what people can and cannot do. It is the ultimate passage about “Trusting the Christ in people, and in their New Nature!” Any behavior that is born out of the will of men is doomed to failed, all changes of behavior must be born out of faith in Christ, and that is what this verse is saying! Again I say, Amen.

Lastly, what the Modern Day Pharisee does not know, is what ungodliness is Paul referring to? The modern Pharisee, without any understanding of historical significance, wants to believe this passage is talking about things like drinking alcohol, going to parties, or any kind of fun activity that doesn’t match their morose ideas of what a true Christian life should look like.

Why does that matter? Because the ungodliness and worldly lust is all something that Paul attributed to the Law of Moses. Paul attributed the Law as being the strength of sin (1 Corinthians 15:56), and made sin exceedingly sinful (Romans 7:13). Paul also referred to the time when he wrote his letters, as the present evil age (Galatians 1:4), as after the cross, but before the Temple was destroyed. The author of Hebrews considered sin to be returning to the Temple system for one’s righteousness (Hebrews 10:26-30).

With that said, I’m not saying that the Grace of God does not continue to teach us to say no to ungodliness and unrighteousness today. What I’m saying is that the context of these verses are talking about a specific time period, where unrighteousness and sin were all considered to be going back under the Law and returning to the Temple system for one’s righteousness. Where the teachers of the Law were called the false prophets and teachers (2 Peter 2:1). We should keep these considerations in mind when reading these passages.

Now some may argue, well Titus was a Greek (Galatians 2:3), so he would not have been privy to the pressures of the Law. That may be true. However, the entire book of Galatians was written to show that Gentiles were falling victim to these false teachers, trying to convince the Gentiles to be circumcised and take up the Law of Moses. While we cannot know for sure, it is likely that Paul is instructing Titus to keep the Gentiles from falling for the same mistake as the church of Galatians.

In closing, when a Modern Pharisee quotes Titus 2:11-14, as some sort of argument against the message of Grace, they are only showing that they have no faith in the Finished Work, they think ungodliness is modern day behavior they don’t approve of, and worse of all, they are admitting that they think the message of Grace will lead to more sinfulness. They are in fact implying the same question that Paul got asked, and he wrote in Romans 6:1-2:

Romans 6:1-2  What shall we say then? Shall we continue in sin, that grace may abound?

God forbid. How shall we, that are dead to sin, live any longer therein?

In Romans 6:2, is Paul saying it is impossible for people who are dead to sin, to live in sin anymore? Because the modern Pharisee doesn’t really believe this, they are convinced that people who live in grace will sin it up, even though that is the exact opposite of what Paul says (Romans 6:14). Paul says the only way people will sin it up, is if they are under the law (1 Corinthians 15:56).