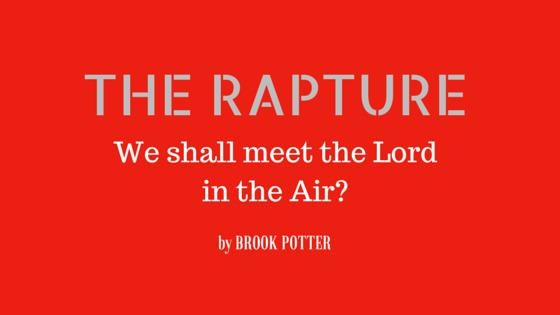 “One of the main reasons, I suppose, why the obvious way of reading the Olivet Discourse [Matthew 24, Luke 21, Mark 13] has been ignored for so long must be the fact that in a good deal of Christian theology, the fall of Jerusalem has had no theological significance.” – NT Wright

In one of my previous articles, I pointed to a number of things I came to learn about the subject of the End Times. I mentioned ten (10) major things I learned, that caused me to consider other interpretations of eschatology outside the realm of the pre-tribulation rapture theology. As expected when one touches a person’s pet doctrine, I got some fervent responses.

One such response was actually in the form of a short clip posted by Joseph Prince.

In that clip, Joseph Prince goes on to explain that the word “Rapture” was used by such people as Shakespeare,  the famous Bible commentator Matthew Henry, and Dr. John Guyse, the Practical Bible expositor. In Joseph Prince’s own words, he says, “It is not a group of people who came together in the 1800’s and coined this word Rapture.”

The problem with Joseph Prince’s reasoning, is that no one is arguing that the word “Rapture,” was coined in the 1800’s. The argument is that the Pre-Tribulation Rapture Theology, that has become associated with the word Rapture, was invented by John Nelson Darby in the 1800’s, not the word “Rapture” itself. In fact, an early form of POST-Tribulation Rapture Theology, also called Chiliasm, is found in the early church, and there is evidence that it has been condemned as heresy by the Council of Nicea, the Synod of Iconium by the 4th century.

All Preterist, Historicist, Idealist and Futurist will agree on the reading of 1 Thessalonians 4:16-17.

1 Thessalonians 4:16-17  For the Lord himself shall descend from heaven with a shout, with the voice of the archangel, and with the trump of God: and the dead in Christ shall rise first: Then we which are alive and remain shall be caught up together with them in the clouds, to meet the Lord in the air: and so shall we ever be with the Lord.

All of the tenets of these verses are generally accepted. Most would agree that the dead will rise first, that those that remain will be transformed, and they all will ascend to meet the Lord in the air. Most would agree that this is the second coming of Jesus Christ, and none of these points would be in dispute. Where the disagreement comes from, however, is the final destination.

The Rapture theology says that the Lord turns around and ushers everyone back to heaven, to wait out the tribulations period. With a plain reading of the text, there is nothing that says the final destination is heaven. To be fair, there is nothing that explicitly says that the final destination is the earth either. However, there is evidence to suggest that those who meet the Lord in the air, actually turn around and escort Jesus Christ back to the earth.

1 Thessalonians 4:14  For if we believe that Jesus died and rose again, even so them also which sleep in Jesus will God bring with him.

In verse 14, we actually see that God is emptying heaven of the dead saints, to bring them with him at his coming. While this is not significant in itself, it does suggest that the trip may be earthbound.

The second suggestion is found in verse 17 itself. It is the use of the Greek word “apant?sis” (Strongs G529) for the word “Meet.” It is used three other times in Scripture, and the use of it is very telling.

The two uses in the New Testament is with the story of 10 virgins going out to meet the bridegroom at his coming (Matthew 25:1, Matthew 25:6). In both uses the meaning entails that the virgins go out to meet the bridegroom and escort him back to the marriage, instead of going with him to a far off land. We know that, because the 5 foolish virgins went to buy oil and came back to the marriage that same night when the doors where shut.

Matthew 25:10  And while they [foolish virgins] went to buy, the bridegroom came; and they that were ready went in with him to the marriage: and the door was shut.

The third use of the word is found in the Book of Acts 28:15. It is the Story of Paul’s trip to Rome.

Acts 28:14-16  Where we found brethren, and were desired to tarry with them seven days: and so we went toward Rome.  And from thence, when the brethren heard of us, they came to meet us as far as Appii forum, and The three taverns: whom when Paul saw, he thanked God, and took courage.  And when we came to Rome, the centurion delivered the prisoners to the captain of the guard: but Paul was suffered to dwell by himself with a soldier that kept him.

Paul and party are making their way from Puteoli to Rome (Verse 13 & 14). When the believers in Rome heard that Paul was coming, they went out to meet him on his way to Rome (verse 15). And we see from verse 16, his final destination was Rome. There is nothing in the text that says that when the brethren met Paul, that they turned and went off to a distant land.

While someone is perfectly free to disagree with me on this point, they would be hard pressed not to agree that the use of the Greek word ‘meet’, in these instances, has a very clear usage that contradicts the Rapture theology of going back up into heaven. While it may not be conclusive, it is good evidence to suggest that those who meet the Lord in the air, do not go back into heaven, but rather escort the Lord back to earth.

3 thoughts on “The Rapture – We shall meet the Lord in the Air?”