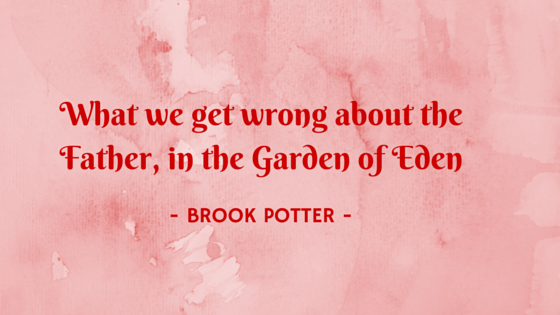 “Many Christians deep down believe that God is angry, vengeful, full of wrath and hard to please. But are they right? ” – Brian Zahnd

In the Western Evangelical church, there is no character of the Godhead that has been more misrepresented than the Father. We all love the person of Jesus Christ with his message of love and mercy. We even enjoy his attacks on the religious and how he had the Pharisees and Sadducees falling over themselves to accuse him.

But when it comes to the Father, we are not so sure. If anyone is honest, when we read about the Father, especially through the Old Testament, he doesn’t really seem like a nice guy. In the Old Testament, the Father appears to be more in line with a Blood Sacrifice god of the Pagans or a Zeus-like God from Greek mythology, waiting for the moment to fry us with his wrath and vengeance.

With just a surface reading of the Scriptures, the Father seems to require blood for appeasement, he appeared to abandon the Son on the Cross when Jesus was in his darkness moment, and he seems to be storing up wrath for humanity to released some day. This is a very different picture than the manifestation of God we see in Jesus, who would rather die than punish sinners for what they have done.

But on closer examination, we may actually be surprised to learn that the Father has been completely misrepresented, by our superficial reading of Scriptures. We can see that the Father never abandoned the Son on the Cross, and that it was not the Father’s heart that caused the apparent genocides in the Old Covenant, but instead it was the nature of the Mosaic covenant that bound God to defend Israel from even future attacks, that lead Israel to its’ wars.

But that brings me to one of the most common misrepresentation that we read into the narrative of Scriptures, but it’s actually not recorded as such. I’m talking about the Genesis story of the fall, and the clothing of Adam with animals’ skins.

Genesis 3:21 Unto Adam also and to his wife did the LORD God make coats of skins, and clothed them.

The general narrative in the Western Evangelical Church, is that when Adam sinned against God, there was a need for a death. So God took it upon himself to kill an animal in garden of Eden, to atone for the sin of Adam. From this narrative, we get our first impressions of what God is like, and how he views sin.

Now there are a number of problems with this interpretation, starting with the fact that nowhere in Scripture is that narrative told concerning the events of the Garden in relation to the fall of man. The Scriptures about the death of the animal are not in the context of sin and death, but instead are the in the context of shame and fear.

The story opens with the fact that Adam and Eve were both innocent, naked and not ashamed.

Genesis 2:25 And they were both naked, the man and his wife, and were not ashamed.

After the fall, the context remains the same, that their eyes were opened and they were not aware of their nakedness, and they became ashamed, and they saw need to cover their nakedness by sowing fig leaves together.

Genesis 3:7 And the eyes of them both were opened, and they knew that they were naked; and they sewed fig leaves together, and made themselves aprons.

Then God comes looking for Adam, but because Adam is now aware of his nakedness, he is afraid and hides himself from God.

Genesis 3:10 And he said, I heard thy voice in the garden, and I was afraid, because I was naked; and I hid myself.

The story goes on to tell us about the dialogue between God and man, then God explains the consequences of their actions, and the curses that would befall the man, woman and the serpent. All of this, BEFORE the death of the animal to clothe Adam and Eve.

The other problem with the narrative is that Adam and Eve still experienced death, after the death of the animal. In fact the whole human race continued to suffer the effects of Adam’s sin, long after the animal died in the Garden. If the animal that was killed in the Garden was for atonement, it wasn’t very successful.

Romans 5:12 Wherefore, as by one man sin entered into the world, and death by sin; and so death passed upon all men, for that all have sinned:

Lastly, this narrative completely ignores the fact that Jesus is said to be the Lamb that takes away the sin of the World. Jesus is the one who undoes the sin of Adam (Romans 5:19). The animal killed in the Garden can be seen as symbolic representation of what Christ will do in their future, but it is not a legitimate atonement.

Now someone may come back to me and say, “Now Brook, let’s be real, don’t forget that Hebrews 9:22 says ‘And almost all things are by the law purged with blood; and without shedding of blood is no remission.’

I’m right there with you, my friend. I am the first to admit that I have butchered this verse out of context for years. Even to this day, I still preach from it, when I feel that the audience is not familiar with Christus Victor, and simply need to understand their forgiveness. But I would simply point out, that the verse says that blood is required, “By The Law.” It doesn’t say that God requires blood, instead it says the covenant of Moses required blood.

As even the Lord said to Jeremiah, he never told Israel to perform blood offerings, but it was written into the Mosaic Covenant, and God bound himself to it.

Jeremiah 7:21-23 Thus saith the LORD of hosts, the God of Israel; Put your burnt offerings unto your sacrifices, and eat flesh. For I spake not unto your fathers, nor commanded them in the day that I brought them out of the land of Egypt, concerning burnt offerings or sacrifices: But this thing commanded I them, saying, Obey my voice, and I will be your God, and ye shall be my people: and walk ye in all the ways that I have commanded you, that it may be well unto you.

Even with the parallel of the death of the animal in the Garden of Eden, with the death of Christ to restore us to the Garden, they both accomplished the same thing. They were there to deal with the same issue of shame. The Father didn’t need payment for sin. The Father’s answer for sin was forgiveness. If someone gets paid back for something, there can be no forgiveness. Forgiveness can only occur when a person cannot repay or make restitution.

The sacrifice of Jesus wasn’t to appease a blood-thirsty Father for sin. Instead, it was the Father revealing the true heart of his person, by allowing humanity to perform the greatest sin, so that He can demonstrate the Greatest Love, by forgiving us and adopting us when we were at our worse. When Jesus said from the Cross, “Father, forgive them (Luke 23:34),” he wasn’t asking the Father to do something against His will, instead he was revealing the Father’s will is always to forgive.