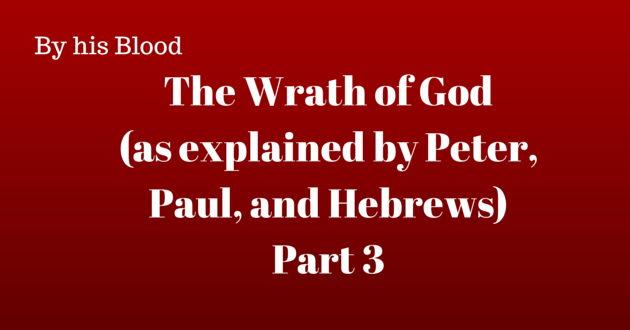 Acts 2:20  The sun shall be turned into darkness, and the moon into blood, before that great and notable day of the Lord come:
In my previous article, we examined some of the passages in the ministry of Jesus discussing the Wrath of God.  I pointed out that the audience of the wrath and judgement passages was always the religious Jews, as the Gospel had not gone to the Gentiles as yet. Until the conversion of the house of Cornelius in Acts 10, there was nothing going to Gentiles, all the messages were directed to the Jews.

In Acts 2, Pentecost had just occurred, and Peter stands up and addresses the Jews from various nations that were witness to the event in Jerusalem (Acts 2:5, 14). Peter then quotes the very passages in Joel 2, concerning the sun going dark, and the moon turning to blood, all before the notable day of the Lord (Acts 2:16-21). Pentecost, was the fulfillment of Joel 2:28-32, the events leading up to what Joel called, “The great and terrible day of the Lord come.”  The audience was Jewish, and only the Jews would have been familiar with the prophet Joel.

After the Stoning of Stephen, we begin to see the message about Jesus going to the Gentiles. Firstly, with the conversion of the Ethiopian eunuch, most likely a proselyte, taking the message of Jesus back to Ethiopia. We see the conversion of the Apostle Paul, on the road to Damascus, and Peter get’s his open vision with the animals, depicting the Gentiles were clean before he went to the house of Cornelius. From this point forward, the talk of wrath is again shown to be directed to one group of people, the Jews.

The Apostle Paul makes this very clear in his letter to the Thessalonians:

1 Thessalonians 2:14-16  For ye, brethren, became followers of the churches of God which in Judaea [Jerusalem] are in Christ Jesus: for ye also have suffered like things of your own countrymen, even as they have of the Jews: Who both killed the Lord Jesus, and their own prophets, and have persecuted us; and they please not God, and are contrary to all men: Forbidding us to speak to the Gentiles that they might be saved, to fill up their sins alway: FOR THE WRATH IS COME UPON THEM to the uttermost.

Paul never included himself, the Church or even the unbelievers to be the recipients of the Wrath of God.  It was only to the group, as he described, who tormented and persecuted the church in Judea and elsewhere, who killed the Lord Jesus and their own Prophets and forbid the apostles from talking to the Gentiles.  The only people who match that description were the Jews.

Further, Paul makes it apparent, that the wrath of God that is described in the New Testament was directed to the Jews. He further explained, in Ephesians 5:6, in reference to the Judiazers: Ephesians 5:6  Let no man deceive you with vain words (Judiazers teaching circumcision and Law): for because of these things cometh the wrath of God upon the children of disobedience (Jews opposing the Gospel).

Another area where this wrath is shown to be the fulfillment of Deuteronomy 32 upon the Nation of Israel, was found in the book of Hebrews. The author of Hebrews was warning the new Jewish coverts to be ready for, and not to reject, Christ and not to sin willfully by returning to the temple system for their righteousness. The day was something that the first century audience was looking out for and expected to happen within their lifetime.

Hebrews 10:25 – 26 Not forsaking the assembling of ourselves together, as the manner of some is; but exhorting one another: and so much the more, as ye see the day approaching. For if we sin wilfully after that we have received the knowledge of the truth, there remaineth no more sacrifice for sins.

The author goes on to warn them of the destruction to come with Apocalyptic Language, Hebrews 10:27  But a certain fearful looking for of judgment and fiery indignation, which shall devour the adversaries.

Further, it explains the sorer punishment that would come to those who had come out from the law of Moses, into faith in Christ only to return to the Temple System for their righteousness. Their punishment would be even sorer than those of natural Jews who never believed in the first place.

Hebrews 10:28 – 29  He that despised Moses’ law died without mercy under two or three witnesses: Of how much sorer punishment, suppose ye, shall he be thought worthy, who hath trodden under foot the Son of God, and hath counted the blood of the covenant, wherewith he was sanctified, an unholy thing, and hath done despite unto the Spirit of grace?

The Author then goes on to remind the Jewish converts of what the Law says concerning the judgement that God is about to bring to Israel for her disobedience.

Hebrews 30 – 31  For we know him that hath said, Vengeance belongeth unto me, I will recompense, saith the Lord. And again, The Lord shall judge his people. It is a fearful thing to fall into the hands of the living God.

This is a direct quote from Deuteronomy 32, again showing that the context of these wrath and judgement passages are in connection with the Law of Moses and the Jews returning to the Temple system after coming to faith in Christ.  This is the quote God prophesied about the end of the Mosaic Covenant, saying in Deuteronomy 32:35  To me belongeth vengeance, and recompence; their foot shall slide in due time: for the day of their calamity is at hand, and the things that shall come upon them make haste.

In my next article we examine Wrath in the book of Revelations.

Enjoying the Wrath of God – The Jesus Trip, with John Crowder.