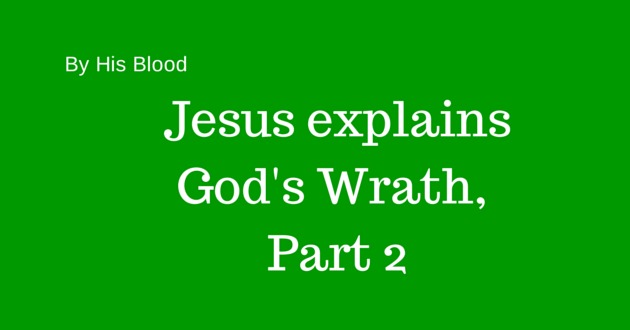 Continued from: What brings the Wrath of God Part 1
Matthew 3:7  But when he saw many of the Pharisees and Sadducees come to his baptism, he said unto them, O generation of vipers, who hath warned you to flee from the wrath to come?

In my last post, we opened the discussion about God’s wrath, as alluded to in the Old Testament, from it’s first appearance in Deuteronomy 32, and it’s confirmation through the Prophets, John the Baptiste and beyond. We ended off with the prophecy in Malachi 4:4-6, foretelling of John the Baptist and Jesus before the dreadful day of the Lord.  Now we will examine the message of God’s wrath going forward into the New Testament, starting with the verse quoted above.

Firstly, in the scripture above (Matthew 3:7), John the Baptist speaks about the wrath to come, while talking to the Pharisee and the Sadducees. In that same context of Scripture, John warns of impending judgement, at that time, that axe is laid at the root of the trees. This is a very soon event that is about to take place.

The thought is paralleled in Luke 3:7  Then said he to the multitude that came forth to be baptized of him, O generation of vipers, who hath warned you to flee from the wrath to come?

We notice something about the above verses, and we’ll soon discover all verses concerning wrath in the New Testament, they are directed to Jerusalem and have a common audience, the Jewish leaders.

Later, Jesus himself warned of the coming destruction that was to befall Jerusalem for their disobedience to the Law of Moses and the Prophets (Matthew 23:38 , Luke 13:35 Mark 13) In Matthew 7:12-14, Jesus spoke about the Law and Prophets (verse 12), and the punishment he described is not an eternal fire in the afterlife, rather he used the word Destruction (verse 13). Jesus is warning Israel, that if they do not keep to the straight and narrow way of the Law and the Prophets, but continued on the broad way, including idolatry, exploitation of their own people, and the hatred of other nations, they would end up in destruction.

Further, Jesus often drew the parallel between himself going to Jerusalem, with the Prophet Jonah going to Nineveh.

Luke 11:30  For as Jonas [Jonah] was a sign unto the Ninevites, so shall also the Son of man be to this generation.

Jesus used the parallel of the Prophet Jonah, often in his preaching to warn of the coming judgement and destruction that was to come upon Jerusalem, that was first prophesied in Deuteronomy 32. (Matthew 12:39, Matthew 16:4, Luke 11:32).

One of the most missed verses concerning Jesus’ and the Coming judgement upon Jerusalem is found in Mark 14:62, where Jesus uses the Jewish idiom of “Coming in the clouds of heaven,” which was synonymous with Coming in judgement.  It is the reason in the following verse that the High Priest tore his clothes, because Jesus was saying that he was going to come in judgement against Jerusalem, in the same way God had come in judgement in the past.

It should be noted, that up this point, there is no speaking of wrath coming upon anyone, except the the Jewish nation, as it was prophesied by Moses in Deuteronomy 32. I would also like to point out, that is was never God’s heart to bring judgement upon Israel, instead it was the nature of the Old Covenant, that required them to be punished if they disobeyed. The Covenant bound God to not only be their protector, but also their punisher, if the Jews disobeyed.

In the next article we will examine, what Peter and Paul had to say about this coming wrath.

The Jewish Idiom of Coming in the Clouds Explained.