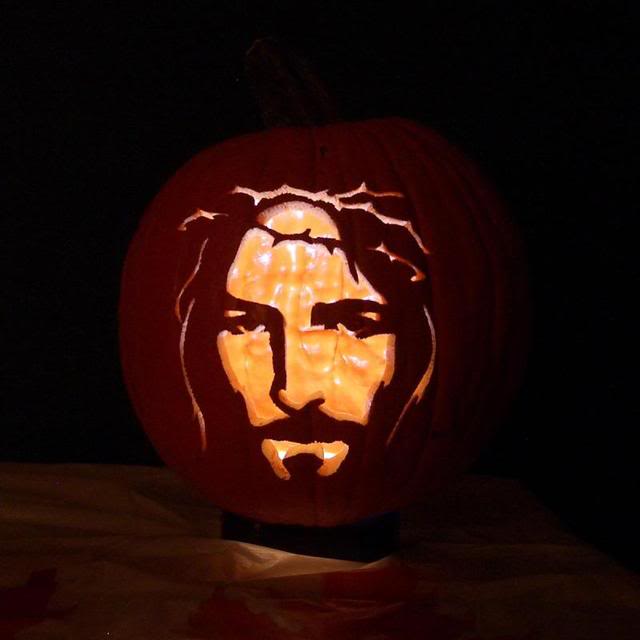 The focus of my ministry is really about awakening people to the truths of the new covenant and the finished work of Jesus Christ accomplished on behalf of all humanity. As such, I generally avoid other topics in the arena of politics, entertainment and social matters. I leave people, in their union with Christ to work things out for themselves.

Somehow, at a recent function I was attending, there was a christian who was lecturing about the apparent evils of Halloween. I made it my business not to address the matter and tried to steer clear. The person went on and on, talking to bunch of parents about keeping their kids away from such demonic and evil activities. One of the parents, knew who I was, and summoned me from across the room to add input to the discussion.

I ventured over, and pretended not to know what the topic of the discussion was. The Christian was all to happy to inform me that the topic was Halloween, and the dangers of it upon young children and how any caring parent wouldn’t have their children involved in such evil.

My initial attempts to avoid the discussion saying this was not the time or the place, was not accepted. I explained I didn’t think the matter was really worth discussing, but that seemed only to stir up the christian crusader even more to be more intent on drawing me into this discussion. Eventually after much nagging, I succum to say there is nothing more evil about Halloween, than any other day in the year, and the only thing that make it evil is the belief of individuals.

That begain our discussion into the reasons why Halloween is so evil.

Christian Crusader: You only say that because you do not know where Halloween comes from. It was originally a celtic druid festival, where they believed that on that day, the dead would cross over and torment the living. They would dress up and offer sacrifices by fire all while trying to communicate with the dead, that is the root of Halloween…

Me: So what you’re saying is that we can trace Halloween back to the druids, and because the druids say the dead cross over, that makes it true, and we should believe them? If you have that much faith in the Druids, why are you a Christian? The last time I checked, the day upon which the druids imposed their festival, can be traced back to the account in Genesis, where God created the days and the seasons, and if memory serves, He said all that he made was Good.

Christian Crusader: Yes yes, but even the Satanic bible says that Halloween is one of their most important days in their calendar. That is the day that they have the most power to inflict damage in this world.

Me: I’m sorry, but doesn’t the Holy Bible describe Satan as a liar? Are you telling me that you not only believe what the Druids say about the day, but you also believe in the Satanic Bible? Is that where you are getting your evidence for this evil?

Christian Crusader: Don’t you understand, its a Pagan Holiday! When the Catholic church got wind of it, they just tried to Christianize it, like they did with all the other Pagan Holidays. It didn’t change anything, it’s still a pagan holiday!

Me: In the words of Martin Luther, Pagans have worshiped the Sun, Moon and Stars, should we pluck them out of Sky? One of the elements that is used in many pagan rituals is water, are you saying we should stop drinking water because it is used in these rituals. Do you know the Bible is sometimes used in rituals, what do you think we should do about that?

Again, there is nothing intrinsically evil or wicked about the day of Halloween, any more so than the sun moon and stars that have been worshiped by pagans. Just because some people ascribe a meaning to it, does not mean that it is actually so.

More importantly, since when was darkness more powerful than light. The fact that the Catholic Church, was able to, in a large way, stamp out the pagan practises of these days isn’t that what we should want? Do we not want the influence of the Gospel to penetrate every facet of the world? Granted it may not be as obvious today, but the majority of people are not doing pagan rituals or animal sacrifices on these days. For the most part, that has been eradicated and only exists in the fringes of society.

The Christian Crusader went onto a bit of a rant about Commercialism and how Corporate America hijacked the days to make money. I’ll spare you the details.

Me: I don’t deny that for a second, but the days are no more evil for it, and pagan behaviours are still not being practiced. Never the less, consumerism is not really the issue you talked about regarding Halloween and its being evil. You talked about Druids, Satanic Bibles, and the Catholic Church. I insisted, that God made all days, none of them He called evil. To the best of our knowledge Satan has no power to make a day evil or bring dead people over to the land of the living. Further, there is no evidence that what the druids said was true or a good reason why we should believe them. More so, there is good scriptural evidence to believe the Satanic bible is lying. I humbly suggest that you are more devil lie conscieous than you are Christ Conscience.

If you want to not participate in Halloween, that is entirely your decision. However, to imply in some capacity that the day is evil, or that those who do part take are also evil and are rendering service to the devil unkowing, is simply not true.

Christian Crusader: What kind of parent would let their children thing it is okay to interact with the dead? Any parent who does that, clearly doesn’t love their children.

Me: Becareful Christian, you cannot say that. First of all, children at not interacted with any dead people. I don’t know when the last time you went out on Halloween, but there are no dead people in the streets, only living people in costumes. Further, what is worse for a child, instilling fear into our kids, that the day is evil and wicked and to be steered away from by staying away from their friends and cowering indoors, or empowering our kids to say there is nothing to fear on that day because Jesus Christ has already defeated the enemy. Which one will more likely result in bold believers for Christ, and which one will result in believers who are afraid of their own shaddow?

Christian Crusade (considerably flustered): What about all those zombies and witch costumes? Doesn’t the bible say to have nothing to do with the dead or with witchcraft? How come you don’t say anything about that.

Me: Oh Boy… Yes, the bible clearly says trying to communicate with the dead is wrong, as is witchcraft. That is a far different proposition from someone who dresses up in a costume. If playing dress up was so wrong, wouldn’t we need to protest all those sports mascots, movies actors, and theater performers, whom all wear costumes of zombies, witches, and devils? That happens everyday around the world in various places, that is no reason to single out that behavior on Halloween.

At this point, the Christian Crusader stormed off, saying something about all of us heathens can go to hell together.

The whole episode was one which I wanted to avoid. I have no illwill to the said Christian, and a few years ago, I may have been on the other side. My one hope from the entire conversation was that the Christian would grow up a little and not be tossed about by every boogie man story that they happen to overhear. I was not trying to embarass the person, rather I was trying to get them to think a little about some of the things they had heard and were trumpeting as matter of fact, by asking the right questions.

I thought some of you may enjoy this.