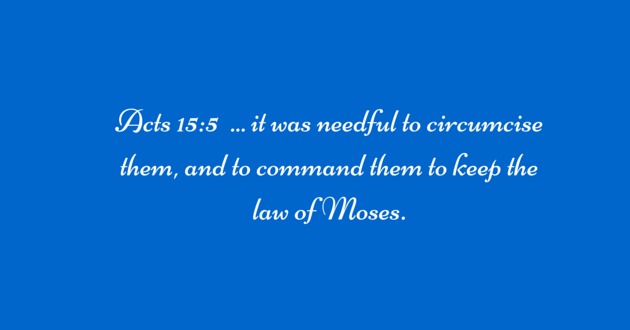 “James was a Jew. He might, perhaps, have considered himself a completed Jew; but he was a Jew for all that, and as such was bound by his Jewishness to both the Mosaic Law and the Traditions of the rabbis. His Christianity never did rise much above Judaism, even though it was Judaism at it’s best.” – John Philip

Early on in my Grace Awakening, I was challenged by a legalist preacher on my interpretation of Ananias and Sapphira. In that argument, I made the comment that Peter, being law-conscious, spoke death over them by his words.

The law preacher, more concerned with being right, asked me how I can make such a statement? To which I said, it was obvious, in the text, that Peter and the other disciples were very much law conscious throughout the Book of Acts.

To this day, it is the hardest thing to convince Christians of the progressive revelation of the Bible. Many are under the assumption that from Pentecost onwards, the disciples were preaching with full revelations of the New Covenant. Of course that is not the case, and it’s evident in the Scripture.

Take the words of Peter, after he was asked to enter into the house of Cornelius, for the first time.

Acts 10:28  And he said unto them, Ye know how that it is an unlawful thing for a man that is a Jew to keep company, or come unto one of another nation; but God hath shewed me that I should not call any man common or unclean.

Peter makes a point to stress that it is unlawful, according to the law of Moses, for a Jew to keep company with a Gentile.

In fact, Jews were sent out to Paul and Barnabas on their mission trips, instructing them to tell the Gentiles to be circumcised and keep the Law of Moses (Acts 15:1). This dispute between Paul and Barnabas sparked the first great church council meeting, the Council of Jerusalem, circa 50AD.

This was the council at which Barnabas and Paul testified of the number of Gentiles that were coming to the faith, and wanted to know what was to be done with them? In the midst of that meeting, a sect of Pharisee believers got up and suggested that the Gentiles should be circumcised and should keep the law.

Acts 15:5  But there rose up certain of the sect of the Pharisees which believed, saying, That it was needful to circumcise them, and to command them to keep the law of Moses.

Almost 20 years after the Cross of Jesus Christ, the Jews, even Jewish believers in Jesus Christ, were still keeping the Law of Moses. It was in this arena that Peter stood up, attested that he was the first to see the Gentiles converted (Acts 10, Acts 15:7), and went on to say that God had accepted the Gentiles just as he accepted the Jews, and there was no need to put any burden upon them (Acts 15:9-10).

What is most telling of all, is the response of James in that Council meeting. Upon hearing the words of Peter, and the testimony of Paul and Barnabas of all the miracles they had witnessed, James makes a declaration.

Acts 15:19-21  Wherefore my sentence is, that we trouble not them, which from among the Gentiles are turned to God: But that we write unto them, that they abstain from pollutions of idols, and from fornication, and from things strangled, and from blood. For Moses of old time hath in every city them that preach him, being read in the synagogues every Sabbath day.

This is a most amazing statement by James! Firstly, he makes it very clear that, for the Gentiles, they should not come under the Law, but should abstain from idols, fornication, things strangled and from blood. Notice he does not include the Jews, this statement is for Gentiles that come to faith ONLY! He then goes on to say that Moses is still preached in every city and in the Synagogues every Sabbath. This is his instruction for the Jews who were in the Synagogues every Sabbath!

I believe, some time after this, Paul has the revelation of Grace being not limited to the Gentiles, but also being extended to the Jews. After years of ministry, Paul returns to Jerusalem and met with James and the other elders (Acts 21:18), and gave a report of all that was being seen among the Gentiles (Acts 21:19).

After Paul gives his report, look at what James and the Elders respond concerning the Jews.

Acts 21:20  And when they heard it, they glorified the Lord, and said unto him, Thou seest, brother, how many thousands of Jews there are which believe; AND THEY ARE ALL ZEALOUS FOR THE LAW:

This is anywhere from 24 to 34 years after the Cross, and James, the Elders and the Jewish believers are still holding onto circumcision and the Law of Moses. In fact they even challenge Paul’s teaching to the Jews, about not having to get circumcised or keep the Law (Acts 21:21). Then James and the elders reaffirm what was decided in the Jerusalem council, that only the Gentiles were excluded from circumcision and from keeping the Law.

Acts 21:25  As touching the Gentiles which believe, we have written and concluded that they observe no such thing, save only that they keep themselves from things offered to idols, and from blood, and from strangled, and from fornication.

Paul’s revelation about Grace had grown beyond the Jerusalem Council’s affirmation to the Gentiles only. Paul was clearly teaching that circumcision of the flesh meant nothing (Romans 2:29), that being in the flesh and trusting in the bloodline of Abraham meant nothing (Galatians 3:29), that there was no longer any difference between Jews and Gentiles (Ephesians 2:15) and that National Israel had been replaced by Jesus Christ, and believers were now the Israel of God (Galatians 6:15-16). All of which the Jerusalem Council never affirmed, but Paul taught, and the Jews eventually beat him and tried to kill him over (Acts 21:28-32).

It is clear from the text that Paul’s Revelation grew past the affirmations of the Jerusalem Council, while the Jewish believers were still yoked to the Law of Moses. Understanding that distinction will help make sense of many of these passages. It is commonly believed that at the destruction of Jerusalem and the Temple in 70AD, the Mosaic Age finally come to an end. Even with that, the Revelation of Grace, as given by Paul about the New Covenant, continues to grow throughout the World.