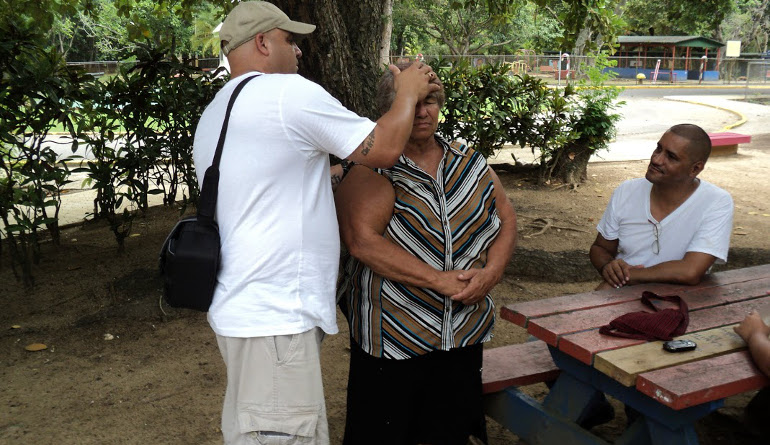 I’ve recently got back from our mission in Puerto Rico.  I would firstly like to thank Alberto Barreto and John Maccarelli , the two brothers who invited and supported us on this trip.  They took amazing care to ensure we were well taken care of and that we met all our engagements on time.    It was also a great joy for me to finally meet Pete’s wife Katie, and their two children, Avian and Desney.

I touched down in San Juan, around 12pm on the 10th of July.  Alberto met me and decided to wait for Pete Cabrera jr and his family. Seeing as where we were staying was two hours away, it would not have made sense to leave and then come back for them.  So we did not end up leaving the airport until close to 8pm.  That began out two-hour drive to Aguadilla, and Alberto’s Residence.

Upon Arrival we met our fellow Brothers John Maccarelli, an Italian American who has become affectionately known as “The Gringo.” Also we met the host of the Kingdom School of Supernatural Ministry in Puerto Rico, Thierry Nakoa.  This was the team we would be working with during our stay in Puerto Rico.

My friend Pete Cabrera jr and his family were somewhat overwhelmed by the heat.  While I was sitting on the front porch in a blazer, my fellow American friends were passing out from the heat.  They really thought I was crazy, but being from the island has some advantages.

Now I knew going into this, Pete Cabrera jr is the front man to these events.  I’m really there to support, and assist him in whatever he needs.  But the Gentleman that he is, he included me as part of his ministry at almost every church that we visited.  He knew there was a fire inside me ready to go at any moment.  That’s the great thing about Pete, he’s not there to steal a show, he’s there to help others become the best they can be.

Our first night of ministry was a house meeting at the Residence of Alberto.  We had about twelve in attendance.  We were supposed to start at 7 pm  but Puerto-Rican time meant everyone was going to show up at 8 pm or later.  We started by ministering to a girl who had back pain.  After we had prayed she felt much better but was not yet fully free from the pain.  Pete asked her to stay, until after he preached his message and we’ll pray for her again.

Pete started preaching about our union in Christ and the importance of not separating ourselves from His Spirit.  While Pete Cabrera jr was preaching his message, Alberto Barretto was translating his words in Spanish for some of the listeners to understand.  At the same time, John Macarelli, recorded the message on his Iphone, and subsequently posted the videos on Facebook.

At the end of that session, we invited the girl with back pain to come back up.  Pete called me and Alberto up to pray for her again, and as we did, she was completely set free from the pain.  Some people left to get back to work, others stuck around for a bit.  Pete expressed that he had more to preach, and not long after we were back in the room, and he preached another message about Jesus and the undoing of Adam.  We didn’t close that session until almost midnight.
Continued in Part 2