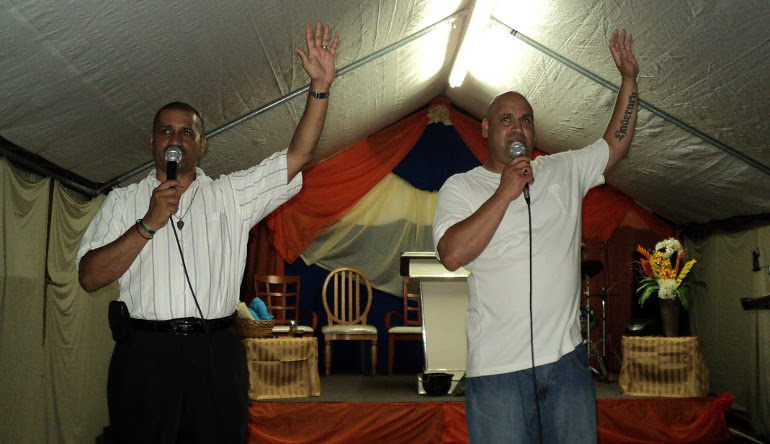 The following night was the first night of the Kingdom School of Supernatural Ministry conference.  I was allowed to open with about an hour.  I shared my testimony and about the journey that God had me on to discovering His Grace and His Power to heal.  I talked about the guilt that believers struggle with that keeps them from coming to God and how the Cross is the answer to that guilt.  Later, Pete Cabrera jr came on and spoke about the work of Jesus as the second Adam, and the restoration of humanity into the garden by Christ.  He addressed the authority of the believer and how we should expect miracles, healing and the supernatural as everyday living.

By the end of the evening, we were preparing to close and we were asked to do a Fire Tunnel.  Now for any of you that know our message, and understand the finished work of the Cross, you know that we are already complete in Christ; we cannot really give you anything new, even via a Fire Tunnel, you already have everything you need.  Pete and I were kind of put on the spot a little.  But we agreed to do the Fire Tunnel, out of respect for our host.  Basically we just ended up praying for everyone and healing anyone with sickness.

The people were really moved by the Spirit.  Some were healed physically, while others had some deep emotional encounters with the Lord.  Eventually it was so much that we broke up individually to try and cover more ground.  Pete, Alberto and myself, each had to fend for ourselves for a bit.  I was the only one at somewhat of a disadvantage because I was the only one of the three that didn’t speak Spanish.  Fortunately I had made a friend with a Costa Rican brother, Alfonso, who assisted me.   It was easy from that point on.

They wanted us to close off the meeting by 10pm, but I don’t think we closed until minutes to midnight.  It was a beautiful evening.  We left there tired and spent, but we felt people had a good idea of what to expect from us for the next day of ministry.  We knew our message would cause some ripples, because most supernatural schools survive on the ideas of impartation and the idea that you lack something.  That’s not our message, we preach the opposite, you are complete, full and lacking nothing.  Over the next day, we had a talk with the hosts and sorted things out, and I believe we understood each other better afterwards.

Coming down to our last few days, we paid a visit to a dear sister from the Dominican Republic, who had recently lost her husband, to do a small memorial service of sorts in her house.  It was an intimate setting in her living room, where Brother Alberto got up and did the service in both Spanish and English.  Not too long into the service, Pete Cabrera was invited to say a few words, and in usual fashion, he started praying for the sick.

While this was going on, a lady who spoke English came up to me and asked me to pray for her.  She had a laundry list of things that was going on with her body.  I really didn’t need to know it all, because the answer to each condition is the same, Jesus.  While ministering to her, her knees got healed, to the point she was marching around the house, in amazement wondering if this was a dream or not.  Her deaf ear opened up and started to gradually improve in hearing over the rest of the evening, and most of all she experienced the Father’s Love upon her life and was set free from wondering if she was pleasing and acceptable to our God.

Pete Cabrera continued to minister to the widowed lady and her family, and eventually ended up speaking to a guy outside while we were eating, about the conditions in his life also.  While we were enjoying our dinner, Pete was talking with this guy and praying for his addictions to be broken and for freedom to come into his life.  By the end of the evening the man had undergone an amazing transformation by the power of God.

Continued in the 6th and Final Part