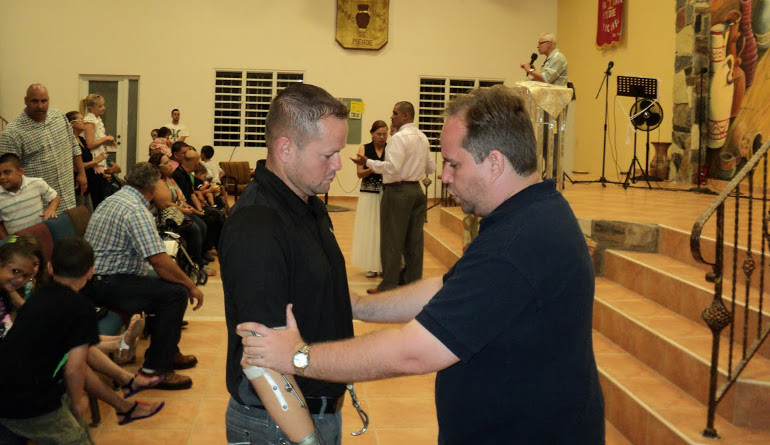 Healings at The Potter’s House

During the week we had some time to relax and recoup. We spent some much needed time at the beach, and seeing some of the beautiful sights that Puerto Rico has to offer. Even Katie, Pete’s wife, was feeling so much more relaxed and at home. Pete Cabrera Jr has been going non-stop in ministry for several months, I myself had been on 3 different islands in less than a month doing ministry, so this was a much needed break with some wonderful time spent together in the ocean.

Wednesday finally came along, when Pete and myself were to do a healing service in The Potter’s house.  We shared the microphone while Alberto translated. Pete Cabrera Jr spoke about Christ in us, and our need to give him room to work in our lives and in the lives of others. When my opportunity came, I spoke about God’s faithfulness to fulfill His plans and destiny in our lives, that we are pre-destined to be conformed into His image, whether we liked it or not.

As we began ministering to the sick, we started praying for people with pain. As a general rule, we start with pain, because people who have pain tend to want to leave early rather than continue to sit in discomfort. Also pain tends to leave quickly, and you want to leave the more serious cases for later when you have the time to minister. The first gentleman with back pain came forward and got healed, then later he went to the bathroom and explained that he used to have prostrate trouble, but after he used the bathroom he had no more pain there either! I got to pray for a man with muscular dystrophy, he was unable to stand, walk or move unassisted.  After I prayed for him, he was able to stand and walk stronger. I prayed for him several times that night and each time he got stronger and stronger.

The highlight of the evening was Pete Cabrera Jr praying for a lady who had crushed spinal discs in her back. She was unable to walk or bend over properly. Pete and his son both prayed for the lady several times. Finally Pete took her legs into his hands and elevated her legs, until he heard something snap into place. At that point, she stood with no pain, and proceeded to bend over and touch her toes as tears streamed from her face.  It was an amazing miracle!

In the midst of all this excitement, we managed to get several persons from the congregation to step up and start praying for the sick. Deaf ears opened, all manner of sickness and pain left people’s bodies, and most importantly for us, the people of that church were now doing the ministry. By the time we left that church, we knew that a great seed had been planted. Many came up to us afterwards to testify of all God had done. It was a good drive home that night.