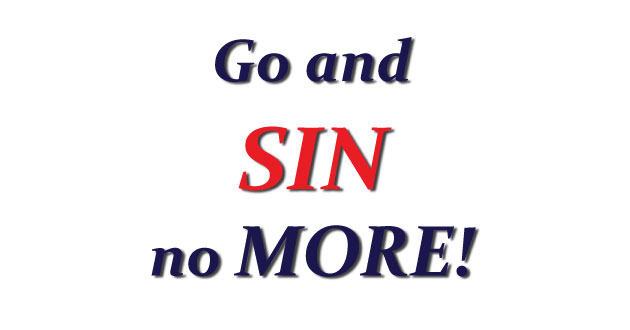 Too often, religious Christians take the Bible and read it as a recipe book, thinking that any Scripture taken from any place means what it says and can apply to every situation. For most Christians, the pivotal event of the Biblical dialogue, namely the incarnation, life, death and resurrection of Jesus Christ, is just an isolated incident, that has no lasting effect on the rest of Scripture.

When context is applied, to show the weakness of a position they support, religious Christians often come up with cliché sayings to try and co option other passages to support their position. They say things like “We must take into account the whole counsel of Scripture.” This is just a fancy way of saying, “The context of that verse doesn’t matter, as much as cherry-picking other scriptures to support my position.”

A classic example of this, is found in the story in John 8:1-11, the story of the woman caught in the act of adultery. At the very end of the parable, Jesus says to the woman (John 8:11b), “…Neither do I condemn thee: go, and sin no more.” Most religious Christians will zero in on the very last three words in the entire parable and build an entire ministry around it.

They skip over the context, the narrative, the circumstance, and even the mercy displayed by Jesus and jump right to the end and exclaim, “You see! Jesus wants us to stop sinning!” Then they go off to champion some moral cause, against someone they disagree with. Their self-appointed war against sin, has been sanctioned by the words of Jesus Himself, in red letters! Nothing will stand in their way on their God-given mission.

This is just an example of what happens when we miss the context of passages. What’s even worse is that nobody even taught them that the parable of the woman caught in the act of adultery is nowhere found in the earlier scriptural manuscripts that were used to give us our Bible translations. All the early church Fathers omit this narrative in their commentaries on John, moving from 7:52 to 8:12. The narrative is nowhere to be found, before the tenth century. So it is possible that Jesus never said those last three precious words that give the sin police all their authority.

But even if the story is part of an oral tradition of actual events, it shows the only time Jesus saw it fit to tell someone to “go and sin no more,” was only after he had put his life on the line for the guilty person, and actively stood between the guilt and her accusers. That would be found in the 95% of the parable that the Religious Christian overlooks to jump to their conclusion.

Do not the context of the parable, change the means by which those last three words can be used? From that simple understanding of context, where once a Christian would use those words to empower them speaking against their favorite moral atrocity, it can no longer do so without a cost.

The narrative suggests, that not only are we to be merciful to the guilty, but if we want to comment on their circumstances, we should have defended and risked much of ourselves, before doing so.

Not Everything Biblical is Christ-Like from Manna and Mercy on Vimeo.