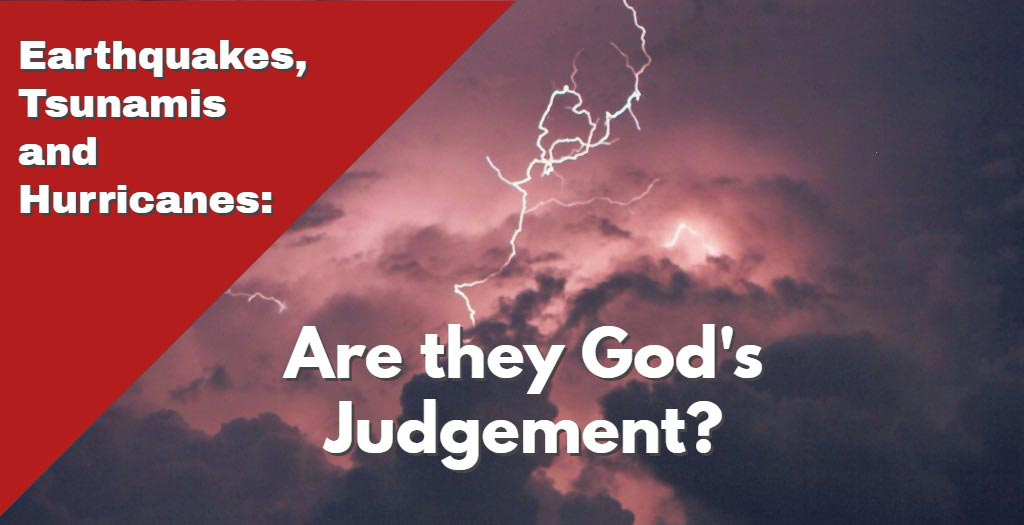 Romans 5:20 says … But where sin abounded, grace did much more abound.

It is often argued that God, in his righteous indignation against sinful nations, sends natural disasters  such as earthquakes, tsunamis, tornadoes and hurricanes as judgement. Or, sometimes as a reminder to change their ways and trust Him.

I have never understood how believers think that God would use killing people, mostly unbelievers, and sending them to hell, as an effective evangelism tool. Thinking like this completely ignores the fact that when God wanted to reach the unbelieving world, He sent his Son, not natural disasters.

The Character of God

Jesus Christ is the measure by which we judge the Scripture and see the character of God. Jesus said some very important things about God’s judgement.

1. John 5:22  For the Father judges no man, but has committed all judgment unto the Son. The Father does not judge anyone.

2. The real clincher is his second statement. John 12:47 If anyone hears me and doesn’t obey me, I am not his judge—for I have come to save the world and not to judge it.

It seems we have a conspiracy here. The Father hands all judgement to the son, then the Son says he’s not going to judge anyone.

In the book of Luke, we see this coming to a head. The disciples asked if they should call down fire from heaven as Elijah did, when the village of Samaritans didn’t receive the words of Jesus (Luke 9:51-54). Now Jesus’ response was interesting. He never denied that the disciples could actually call down fire. Rather, he rebuked them, saying they knew not what Spirit they were of.

Luke 9:55 – 56  But Jesus turned, and rebuked them, and said, You know not what manner of spirit you are of. For the Son of man did not come to destroy men’s lives, but to save them. And they went to another village.

What about past judgments in the Bible?

Now, I’m not denying that there is judgement to come. But it is called The Day of Judgement. This is when men will be judged for what they have done with Jesus Christ. That day is not today.

Neither am I denying the judgments of the past. But, we live under the New Covenant, where the Blood of Jesus has dealt with the sin issue, once and for the whole world (1 John 2:2).

In fact, if God the Father were to judge a nation or a people now, He would have to apologize to Jesus for shedding his blood for the forgiveness of sin, in vain. It would ultimately make Jesus Christ a liar, for having prophesied that all sins would be forgiven the sons of men. (Mark 3:28)

So what about all those dreams and prophecies about tsunamis, hurricanes and earthquakes? Well, how did Jesus deal with natural weather phenomenon that threatened people’s lives? He took authority over it, and said “Peace be still.” (Mark 4:39)

Oh, how we miss the heart of the Father in these dreams and visions. God fully knows the power he has invested in his children, and the authority we have over the earth. (Psalms 115:16  ) It is our responsibility to establish God’s will on the Earth. Hence, God reveals those things to us, not as a certain event that will happen.

Rather, He is showing us the plans of the enemy that we can take authority over it and bring it to nothing. This is so that unbelieving men wouldn’t perish and go to hell. Rather they will come to learn of the goodness of God that leads to repentance and be saved. (2 Peter 3:9)

Now Over To You!

What do you think? Does the Bible support this argument of disasters like earthquakes, tsunamis, tornadoes and hurricanes being the work of God? Do you believe we have authority of the elements?

5 thoughts on “Earthquakes, Tsunamis and Hurricanes, are they the Judgement of God?”