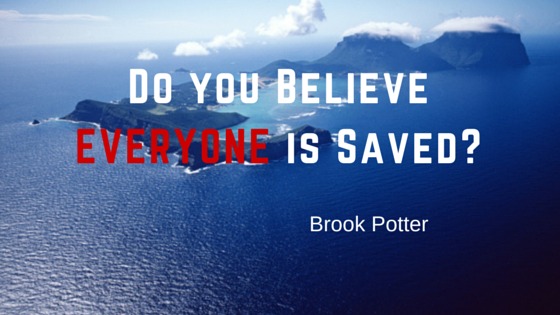 “Humanity is already ‘saved’ in principle. We individuals have to appropriate that salvation. But the really tough work – the bit we could not have done for ourselves–has been done for us.” – CS Lewis

The hardest transition for most western Christians to make, is the transition from the Greco-Roman mindset to the Jewish mindset on the understanding of Scripture. Unfortunately for many who have yet to make that transition, the teaching of Trinitarian Theology usually leads people to equate it with Universalism, because they fail to understand the objective and subjective truths of the Gospel.

The most common question that I am confront with is “Do you believe that everyone is saved?”. To the Western evangelical church, this is the equivalent to asking, “Do you believe everyone is going to heaven?”. This is because much of Western Christianity has been reduced to a matter of heaven and hell. But the Eastern view of salvation is not so clear cut, and often begs the question, “It depends on what you you think we are saved from?”.

The problem of course is that the root Greek word for “saved,” (sozo, Strongs G4982) has multiple meanings. Not only does it mean salvation, but it also means healing and deliverance. It is not exclusively used in a sense of the afterlife or heaven and hell.

Humanity Saved from the Work of Adam.

1 Timothy 4:10  For therefore we both labour and suffer reproach, because we trust in the living God, who is the Saviour of all men, specially of those that believe.

One of the central doctrines of Trinitarian Theology is the objective work of Jesus Christ, the last Adam, came to undo the work of the First Adam. Through the blood, the curses from the Garden of Eden and the Law have been abolished, and humanity as a whole has been recreated through the resurrection (1 Peter 1:3).

In this sense, the root word “saved” can be better understood as Healing, in that humanity has been healed of the outside entity of sin and death that has been plaguing them since the Garden. So in a sense, all of humanity is saved/healed from the work of Adam (Ephesians 2:5), and have been made spiritually alive (Colossians 2:13), and are now capable of understanding Spiritual truths, and can respond to the preaching of Jesus by faith (Ephesians 2:8).

Jewish Believers saved from the persecution of the unbelieving Jews

Revelation 12:10  And I heard a loud voice saying in heaven, Now is come salvation, and strength, and the kingdom of our God, and the power of his Christ: for the accuser of our brethren is cast down, which accused them before our God day and night.

The major enemy of the early Church, was the Judaizers seeking to put Gentile believers under the Law of Moses. For the most part, the Roman Empire didn’t care about this small sect of Jewish believers in Jesus Christ. The first martyr for Christ was Stephen, and it was not by the hands of the Romans that he was stoned to death, it was by the hands of the Jews (Acts 7:54-60).

Jesus actually pointed out that the accuser of the brethren was not Satan, but was in fact the Law of Moses. The Law had become the accuser before God.

John 5:45  Do not think that I will accuse you to the Father: there is one that accuseth you, even Moses, in whom ye trust.

The salvation that Revelation 12:10 is talking about, is the deliverance of believers, both Gentile and Jews from the Jewish persecution, when the Lord came in judgement at the end of the Mosaic Age. Again this use of salvation is not about the afterlife or heaven and hell.

Jews Saved from the Destruction of Jerusalem.

Matthew 10:22  And ye shall be hated of all men for my name’s sake: but he that endureth to the end shall be saved.

There is another aspect of Salvation that the New Testament alludes to, and that is the Salvation of the Elect Jews, from the coming destruction of Jerusalem and the end of the Mosaic Age. Jesus Christ made these statements under the old covenant, directed to his Jewish disciples. According to the works of Josephus, we learned that in the seize of Jerusalem, none of the disciples of Jesus, who heeded his warnings, were harmed in the battle.

In this case, the word saved is better understood as deliverance, as in the believing Jews were delivered from the judgement of God against Jerusalem. This is a common theme written throughout the New Testament that was directed towards the Jewish believers.

As the Apostle Paul attested in the book of Romans concerning his Jewish Believers: Romans 11:14  If by any means I may provoke to emulation them which are my flesh (Jews), and might save some of them.

I’ve listed three examples of salvation that have nothing to do with the afterlife. I believe we do a great injustice when we take the terms salvation and saved, and use them in a blanket sense about the afterlife, when that may not be the context that Scriptures uses them. I most definitely believe that all humanity has been saved from the work of Adam (Titus 2:11), and that those who believe on the Finished Work get to experience that salvation (1 Timothy 4:10).

As for how God decides to apply those tenets to the afterlife, and as to the nature of Hell, I’m uncertain, but remain hopeful.