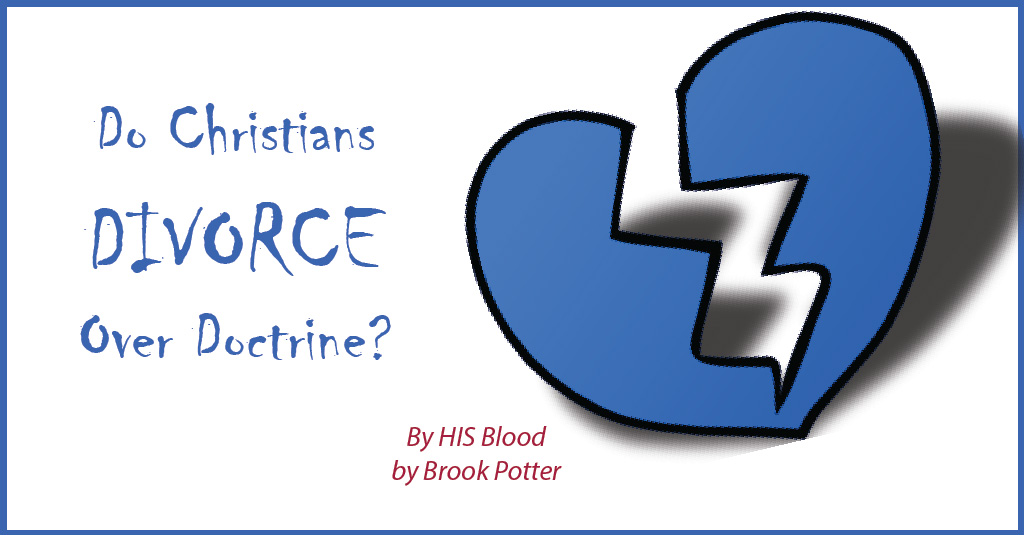 “Everyone says they are trusting God for their relationships, but then have all of their own reasons why someone is not good enough.” – Brook Potter

Do Christians Divorce Over Doctrine?

I would like to start out by saying, I’m not married. In the area of dating and marriage, Christians have all but handed themselves over to Gnosticism, the belief that everything spiritual is good and that everything physical is evil. Our goal is to be more spiritual and less physically evil. All of the Christian cliches about relationships and marriage come out of this sort of thinking.

For instance, “true love waits.” While this super spiritual-sounding phrase has it’s roots in sexual purity, it is simply a false conclusion to say that saving your virginity equals true love. We create an additional issue when one or both parties are not virgins and come together, according to this cliché, they don’t have true love. Even in a none-sexual way, how can you be truly in love with someone and waiting for them, when they only exist in our imagination and prayer life? Simply, you cannot!

But reality never stops Christians. Instead we create an ideal in our imaginations, that, of course, can do no wrong. When finally a real person enters the picture, and doesn’t match our fantasy spouse we have been clinging to for all this time, that person usually gets rejected. As we grow older and the more we lean on our spiritual fantasies, we lack the emotional maturity to actually deal with real people in a romantic setting. Of course this problem gets worse as we get older.

Another area of Gnosticism that we encounter is this idea that we should put spiritual disciple first in our relationships. The idea is that if we are strong spiritually, we will naturally be strong in our relationships. While this appears to have some form of wisdom, no amount of spiritual maturity will ever equip us with dealing with another person.

Firstly, this was not the way Paul saw the dynamic of marriage. Paul was very practical in his marital advice, which in his eyes was rooted in sexuality between and man and woman (1 Corinthians 7:1-6). But look how Paul included the idea of spiritual discipline in the context of marriage:

1 Corinthians 7:5  Do not deprive one another, except perhaps by agreement for a limited time, that you may devote yourselves to prayer; but then come together again, so that Satan may not tempt you because of your lack of self-control.

In the eyes of Paul, the spiritual discipline was subordinate to the sexual intimacy of the Man and the Woman. One was only to enter into solo fasting and prayer, with permission from the one’s spouse for a time, but come back together again. Paul saw that it was the intimacy between the husband and wife that would keep Satan from tempting you, not the spiritual discipline as religious teachings have us believe.

What is the greatest problem affecting Christian Relationships/Marriage today?

Lastly, this overemphasis on the spiritual has created another Gnostic ideal, which allows us to escape the issues of our partner, rather than deal with them as a person. When an argument comes up, with real emotions and issues, it is not uncommon to super-spiritualize the encounter, and blame higher spiritual forces at work. Why deal with an angry spouse, when we can simply deal with the spirit of anger pulling the strings.

This is a large reason why loneliness and growing apart is so big a reason in Christian divorce. As believers, we have an escape by way of ministry and Spirituality to avoid the tough issues in our relationships. Rather than admit to our own inability to deal with our issues, we can find ways to ignore and suppress those issues, at the expense of our connection to the other person. This minimizes the real issues and emotions of the other person, and can lead to a feeling of isolation even within marriage.

So what am I saying with all this? I’m saying that the overemphasis on unseen Spirituality to the neglect of the physical person and their needs, is dangerous and Gnosticism at it’s worst. The incarnation of Jesus Christ into this world, is the end of Dualism and the separation between the Spiritual World and the Physical World. We need to see ourselves through that sense, that everything, from sexual relations to our arguments, are all spiritual and not reject real aspects of an individual in the name of our personal brand of Spirituality.

What do you think? How have these things affected your marriage or relationships?

Gnosticism Vs. the Incarnation – John Crowder