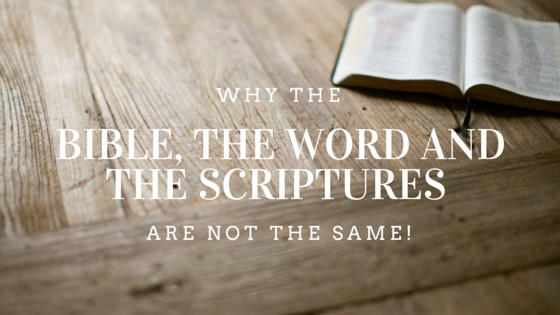 “The Bible did not produce the Church, but the Church produced the Bible.” – Eastern Orthodox proverb.

In recent weeks I’ve come under fire for my comments concerning the Bible. Many of my Religious and Western Evangelical friends are in shock to learn that I do not hold their Protestant tradition of the Bible as the “Word of God.” Upon hearing this statement in a vacuum, many of my friends now feel that I’m not really a serious Christian. However, this concern comes mostly from their ignorance to what I actually believe on the subject and the fact that there are other views and traditions concerning the Bible outside of Protestantism.

For instance, the very first verse that the religious will quote to support their idea that the Bible is the Word of God, is 2 Timothy 3:16 All scripture is given by inspiration of God, and is profitable for doctrine, for reproof, for correction, for instruction in righteousness:

Now what most Christians wouldn’t realize, is that by quoting 2 Timothy 3:16, they have implicated themselves in a bait and switch! The verse says nothing about the “Word of God,” it talks about “The Scriptures.” And that exposes the error of their thinking, they are reading their meaning into the text, instead of letting the text speak for itself.

In the mind of the religious, The Bible, the Word, The Word of God and the Scriptures are all synonymous and interchangeable, even though Scripture makes a clear distinct between them. We can see the flaws in this by reading the first 4 verses of the Gospel and John, and try inserting the word “Bible,” everywhere we see “the Word,” and we’ll see the issues. The distinction can be seen in in John 2:22, where the verse actually points out that the Word Jesus spoke, and the Scriptures are two distinct things, that the disciples came to believe after the resurrection.

John 2:22 When therefore he was risen from the dead, his disciples remembered that he had said this unto them; and they believed the scripture, and the word which Jesus had said.

With that said, I believe all the truths about Scripture. I believe it’s inspired, is good for doctrine, (2 Timothy 3:16), I believe the scriptures cannot be broken (John 10:35), and I also believe that the Scriptures do not contain eternal life, but instead lead us to Jesus (John 5:39, Galatians 3:24). I hold all these things to be true, but I don’t make these verses say what they are not saying. These verses affirm the Scriptures, which is what Jesus and the Apostles actually called their Bible.

John 5:39 Search the scriptures; for in them ye think ye have eternal life: and they are they which testify of me.

Proverbs 30:5 KJV
Every word of God is pure: he is a shield unto them that put their trust in him. pic.twitter.com/0UrsVsuDZD

While I do not hold to the idea that there is Bible in the Trinity, or that Jesus is the Bible, I do hold to the position of “Prima Scriptura,” that is, the Bible most definitely has primacy in my walk of faith, but Jesus Christ holds supremacy in my walk of faith. The two are distinct but often overlap. God can, of course, take any Scripture, and illuminate it by the Holy Spirit and then it becomes the Word of God. But again, that is dependent on God using the Scripture to speak, but not based on the Scriptures by themselves.

2 Corinthians 3:6 Who also hath made us able ministers of the new testament; not of the letter, but of the spirit: for the letter killeth, but the spirit giveth life.

The Scriptures have many uses to describe themselves. Jesus often referred to them as the “the law and the prophets (Matthew 11:13),” or even including the Psalms (Luke 24:44). The Apostle Paul talked about the Parchments to Timothy (2 Timothy 4:13). But the phrase, “Word of God” is described as having two uses in the Scriptures. Firstly to describe Jesus Christ himself, as in the book of Revelation.

Revelation 19:11-13 And I saw heaven opened, and behold a white horse; and he that sat upon him was called Faithful and True, and in righteousness he doth judge and make war. His eyes were as a flame of fire, and on his head were many crowns; and he had a name written, that no man knew, but he himself. And he was clothed with a vesture dipped in blood: and his name is called THE WORD OF GOD.

The Second use, of the phrase “Word of God,” is used by Jesus to describe something that God actually said. That is the application Jesus used the phrase when describing the Talmud teachings of the Pharisee, concerning the Corban as a way to get around the commandment to honor thy father and mother (Mark 7:8-23).

Jesus is of course talking about the commandment given by God to honor thy father and Mother (Exodus 20:12, Deuteronomy 5:16), which is something that God actually said written on the tablets of stone. Jesus then makes the point that Moses added to the commandment, by including the curses and death to which God did not say.

Mark 7:10 For Moses said, Honor thy father and thy mother; and, Whoso curseth father or mother, let him die the death:

Then Jesus accuses the Talmud of taking the Word of God completely out of context, of introducing the Corban, a Gift to the Temple, as a way to get around taking care of one’s Father and Mother. IN doing so, the Word of God, which was the commandment God actually said, was made of no effect.

Mark 7:13 Making the word of God of none effect through your tradition, which ye have delivered: and many such like things do ye.

When we examine many of the popular “Word of God,” uses in Scripture, we’ll see that they really do refer to a person, not a Book. For instance, many people quote Hebrews 4:12, ”For the word of God is quick, and powerful, and sharper than any two-edged sword, piercing even to the dividing asunder of soul and spirit, and of the joints and marrow, and is a discerner of the thoughts and intents of the heart.”

To which I say, Amen! Do you think that the Bible is able to “discern the thoughts and intents of the heart?” Or how about the very next verse that says that the Word of God is in fact a male person with the ability to see, by the use of the phrase “in HIS sight.”

Hebrews 4:13 Neither is there any creature that is not manifest in HIS sight: but all things are naked and opened unto the eyes of him with whom we have to do.

Take for instance the famous verse from Isaiah 64:4 For since the beginning of the world men have not heard, nor perceived by the ear, neither hath the eye seen, O God, beside thee, what he hath prepared for him that waiteth for him.

If the Word is settled referred to the Scripture, we would expect the words of Isaiah to still be true today, but when Paul quotes that verse in 1 Corinthians 2:9-10, he actually says this verse is no longer true, as the mystery has been revealed.

1 Corinthians 2:9-10 But as it is written, Eye hath not seen, nor ear heard, neither have entered into the heart of man, the things which God hath prepared for them that love him. BUT GOD HATH REVEALED THEM TO US BY HIS SPIRIT: for the Spirit searcheth all things, yea, the deep things of God.

However you want to take it, the Scripture in Isaiah was not settled until Paul gave us the revelation in Corinthians. Even though, Isaiah is most definitely considered Scripture as Jesus quotes from his prophecies often (Matthew 3:3, 4:14, 8:17, Luke 4:17), many of those verses were fulfilled and no longer apply to us today.

Therefore, if verses of Scripture can be upgraded, satisfied and fulfilled to no longer apply to us today, then they are not settled. However, if the Word is referring to Jesus Christ, and the Scriptures are in fact a progressive revelation, then we have no conflict.

In summary, when I say the word Bible I’m referring to a collection of Scriptures. Further, the Scriptures are the God-inspired writings of the Old and New Testament and lastly, the “Word (John 1:1-4)” or the “Word of God,” is referred to as either Jesus Christ himself, or as something that God actually said. As the Scriptures say, the Word was made flesh (John 1:14), it does not say that after it became flesh, it then went on to become a book. At least, that is what I see in Scripture, and that is how I understand these terms.

In closing, I have no problem with my Evangelical brothers and sister holding to their traditions to say that the Bible is the “Word of God.” They are free to do that, just like every other branch of the church is free to hold to their own traditions. What I feel is not alright, is when evangelicals decide to take that position on the Bible and use it to degrade, abuse and insult brothers and sisters who have a different understanding.

We can all do with a little humility before charging out with less than full understanding. As the Scriptures say, “God resists the proud, but giveth grace to the Humble” (1 Peter 5:5).

Bertie Brits – What is the Logos, Word of God?

5 thoughts on “Why The Bible, The Word of God and the Scriptures are not all the same!”