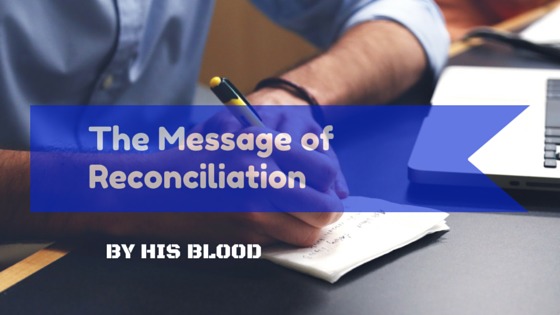 “The Gospel is incredibly Good News that would make a man jump for joy. What is News? Something that has already happened and I’m reporting it to you.” – Malcolm Smith

If you are like most people growing up in the realms of the Full Gospel arena, you probably went forward to give your life to the Lord on more than one occasion. The Church world conveniently calls that a re-dedication to the Lord. That is the title given to those who have gotten “saved” then “back slid” somehow and came forward to get saved again.

The problem, as I see it, is we preach the message of salvation, without another very important message, the message of Reconciliation. So many people believe that they are saved but they have no idea that they have been reconciled and all the benefits that come with it. Further they don’t know that they were reconciled even before they were believers. So now that they are believers, they think it is up to them to maintain their salvation, forgiveness and other aspects of their relationship with Christ.

When God set about to demonstrate his Love towards us, He did so by showing us the greatest possible kindness, while we were yet sinners (Romans 5:8), and enemies towards him in our minds (Colossians 1:21). It would be no great boast of God’s love, if He showered His blessing only on believers who love Him. Do not all other religious gods love those who love them? What sets our Father apart, is the demonstration of His love to them that hate Him.

For while we were yet sinners, Christ died for the ungodly (Romans 5:6), and through the work on the Cross, the Bible records that we were reconciled to the Father, wholly and completely independent of our effort, religious duty or faith. Of course without faith, none of these benefits do us any good, but faith in them doesn’t make them true. They are already true, faith is our response to these truths.

What is the word of Reconciliation? It is to tell people what has happened to them because of the Cross, even before they were believers. God Reconciled them to himself, and is not imputing their trespasses against them anymore. It is repeated elsewhere in the New testament that while we were still dead in our sins, God made us alive together with Christ (Ephesians 2:5), and Forgave us all our trespasses (Colossians 2:13).

The goodness of God goes even further. That God would choose to adopt this sinful race of humanity and make us acceptable in Christ, even before we were believers (Ephesians 1:5). The notion that the Infinite, un-caused Creator of all things would adopt a temporary, finite, sinful being, is about as crazy a notion as a human couple adopting a toaster. That is the goodness of our Father. That is the news that makes people jump for joy. This doesn’t become true when you believe it, it is already true, and faith is my response unto salvation. Again, even though all of this has already taken place, it doesn’t lead to any benefit without faith.

Rather than preaching the finished work and the message of reconciliation, we have preached the message of salvation that if men would repent and believe then these benefits become yours as a reward. Leaving many believers with a potential Gospel that leaves responsibility for their salvation on the shoulders of the believer to keep the faith, rather than a sure message of reconciliation. Many believers think this only becomes true IF we repent and believe. If it only becomes true when you believe it, then its not news, its a potential message based on if you believe or not.

This is why there are so many re-dedications every week and also why so many get frustrated and leave faith gatherings. Believers think that at some time between the weekly services, they sinned, or they haven’t believed enough, or truly repented enough, so they think they have lost all these benefits and are back to square one and need to get saved again. Their whole walk becomes about maintaining their relationship with Christ by religious disciplines rather than resting in the relationship Jesus gave them freely through the Cross.

Joshua Tongol’s Sermon Jam about Jesus is Greater than Adam.

1 thought on “By His Blood – The Message of Reconciliation”