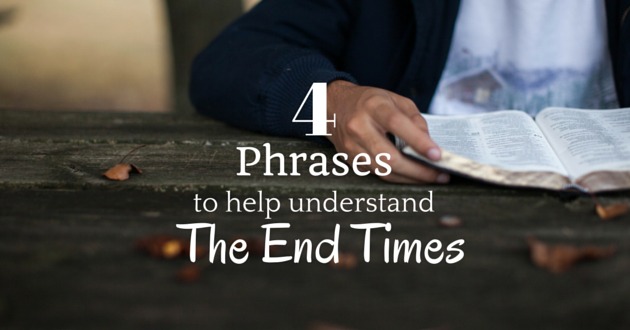 “Reading the Bible in context, has become the new false teaching.” – Brook Potter

I’ve written a number of articles over the years, on the subject of The End Times. Some people have asked me, what is the importance of having a healthy End-Times theology? There are two main reasons I have focused on this subject.

With that said, I want to address 4 Jewish idioms that are found in Scripture. I especially want to look at the End Times. I’ll also explain their meaning from the Jewish perspective. Many of these expressions have been taken literally, without any real thought of their use throughout the Scriptures. This has led many to believe things that the Bible is not actually saying.

1. Coming in the Clouds

Mark 14:62  Jesus said, I am. You shall see the Son of man sitting on the right hand of power and coming in the clouds of heaven.

When reading the New Testament, we see a number of references talking about Jesus coming in the clouds. The common idea is that these verses are all talking about either the Rapture or the second coming of the Lord. But the Bible actually has a very different meaning to “clouds”, as seen through the lens of the Old Testament.

For instance, when God discussed his coming in judgment against Egypt, the Lord was said to be riding on swift clouds. This is recorded in Isaiah 19:1 The burden of Egypt. Behold, the LORD rideth upon a swift cloud, and shall come into Egypt: and the idols of Egypt shall be moved at his presence, and the heart of Egypt shall melt in the midst of it.

It is the reason the high priest, after hearing these words of Jesus, torn his garments and concluded these words to be blasphemous.

Mark 14:63  Then the high priest rent his clothes, and saith, What need we any further witnesses?

Matthew 5:18  For verily I say unto you, Till heaven and earth pass, one jot or one tittle shall in no wise pass from the law, till all be fulfilled.

This verse has been used by some to suggest that because the physical earth and the physical heavens are still present with us, therefore the Law is still in effect. But what most people often forget to do is read the other reference where Jesus says that within that generation, the generation whom Jesus was speaking too, heaven and earth were said to pass away.

Matthew 24:34-35 Verily I say unto you, This generation shall not pass, till all these things be fulfilled. Heaven and earth shall pass away, but my words shall not pass away.

Now, I would be the first to admit there is a great deal of debate on this subject. But one thing is certain, heaven and earth do not mean this literal heaven and this physical universe. However, Peter gives us a clue to this meaning, by his description that the old heaven and the old earth perished in the Flood of Noah. And Peter and the Early Church was living under a different heaven and earth.

2 Peter 3:5-7  For this they willingly are ignorant of, that by the word of God the heavens were of old, and the earth standing out of the water and in the water: Whereby the world that then was, being overflowed with water, perished. But the heavens and the earth, which are now, by the same word are kept in store, reserved unto fire against the day of judgment and perdition of ungodly men.

The Bible uses heaven and earth in multiple ways throughout Scripture. One such use is that of Covenant Language. This is used to describe the nation of Israel. Here’s Moses’ description in Deuteronomy 31:28  Gather unto me all the elders of your tribes, and your officers, that I may speak these words in their ears, and call heaven and earth to record against them.

Another instance of heaven and earth, is used to describe Jerusalem itself. this is recorded in Isaiah 65:17-18. For, behold, I create new heavens and a new earth. And the former shall not be remembered, nor come into mind. But be ye glad and rejoice forever in that which I create. For, behold, I create Jerusalem a rejoicing, and her people a joy.

Lastly, another use of heaven and earth is used to describe the Temple, where heaven and earth would meet. The veil was purple, representing the red of the earth touching the blue of heaven, leading into the Holy of Hollies, where God dwelt. And, in the outer court of the temple, there was the molten sea (2 Chronicles 4:2, 1 Kings 7:23). This was where the priests would do their ceremonial washing.

The temple view of heaven and earth would be inline with Matthew 24, where Jesus is talking about the destruction of the Temple. This view is also supported by the works of Josephus who wrote in great detail about the symbolism of every item to represent heaven and earth, in Book 3 of the Antiquities of the Jews.

No matter which meaning you decide upon, it makes for an interesting study.

Matthew 24:30  Then shall appear the sign of the Son of man in heaven. And then shall all the tribes of the earth mourn. And they shall see the Son of man coming in the clouds of heaven with power and great glory.

Many times in the New Testament, there is the mention of the word, “tribes”. Many believers automatically read themselves into this word, thinking it is referring to our modern idea of variation of people and nations. However, the Bible has a very specific use of the word tribes, to refer to the 12 tribes of the nation of Israel exclusively.

For instance, the very first chapter of the Book of James tells us that there are only 12 tribes. James 1:1  James, a servant of God and of the Lord Jesus Christ, to the twelve tribes which are scattered abroad, greeting.

James is an Apostle of the Jews. So it means that he is talking to the twelve Jewish Tribes.

Similarly, John, also an Apostle to the Jews, writes in the Book of Revelation about the elect being sealed to evangelize the nation of Israel, and the 144,000 Jews, from the twelve tribes of the Nation of Israel.

Revelation 7:4  And I heard the number of them which were sealed: and there were sealed an hundred and forty and four thousand of all the tribes of the children of Israel.

2 Peter 3:10 But the day of the Lord will come as a thief in the night. In the which the heavens shall pass away with a great noise. And the elements shall melt with fervent heat. The earth also, and the works that are therein, shall be burned up.

When I believed in Rapture Theology, I thought this verse was referring to a cosmic undoing of the universe by fire. I thought that the “elements” spoken about in these passages were atoms and molecules, being burned up and out of existence. However, the use of the word elements in the New Testament has nothing to do with Quantum Physics.

Paul gave us some insight into these elements in his writing to the Galatians, where the Judaizers had come in and tried to get the Gentile believers to be circumcised and to keep the Law of Moses. It is in that context, the Law of Moses and Temple system, that Paul writes Galatians 4:9. But now, after that you have known God, or rather are known of God, how turn you again to the weak and beggarly elements, whereunto you desire again to be in bondage?

The elements that are beggarly and going to melt like wax, are most likely the elements of the Temple. Peter and Paul are talking about the Lampstand, the table of Show bread, the Altar of Incense and the Altar of burnt offerings. There is debate as to if the Ark of Covenant survived the destruction of the temple. But it would have been included as the temple elements.

In my understanding, the elements did in fact melt like wax when the Roman forces came in and burnt the Temple in 70AD. The gold from all the decoration was said to have melted down into the cracks of the brick. There each stone of the temple was disassembled, brick by brick, so the Romans could get the gold out. This fulfilled the words of Jesus, Matthew 24:2. And Jesus said unto them, See you not all these things? verily I say unto you, There shall not be left here one stone upon another, that shall not be thrown down.

In conclusion, a verse of Scripture cannot mean something that it’s original intended audience never knew it to mean. When reading the Scriptures, especially on the subject of End Times, we must try to understand the text from the perspective of the audience. And the time period to which it was written. While there are many other examples of Idioms throughout the Bible, these four helped me move to a more optimistic view of the future.