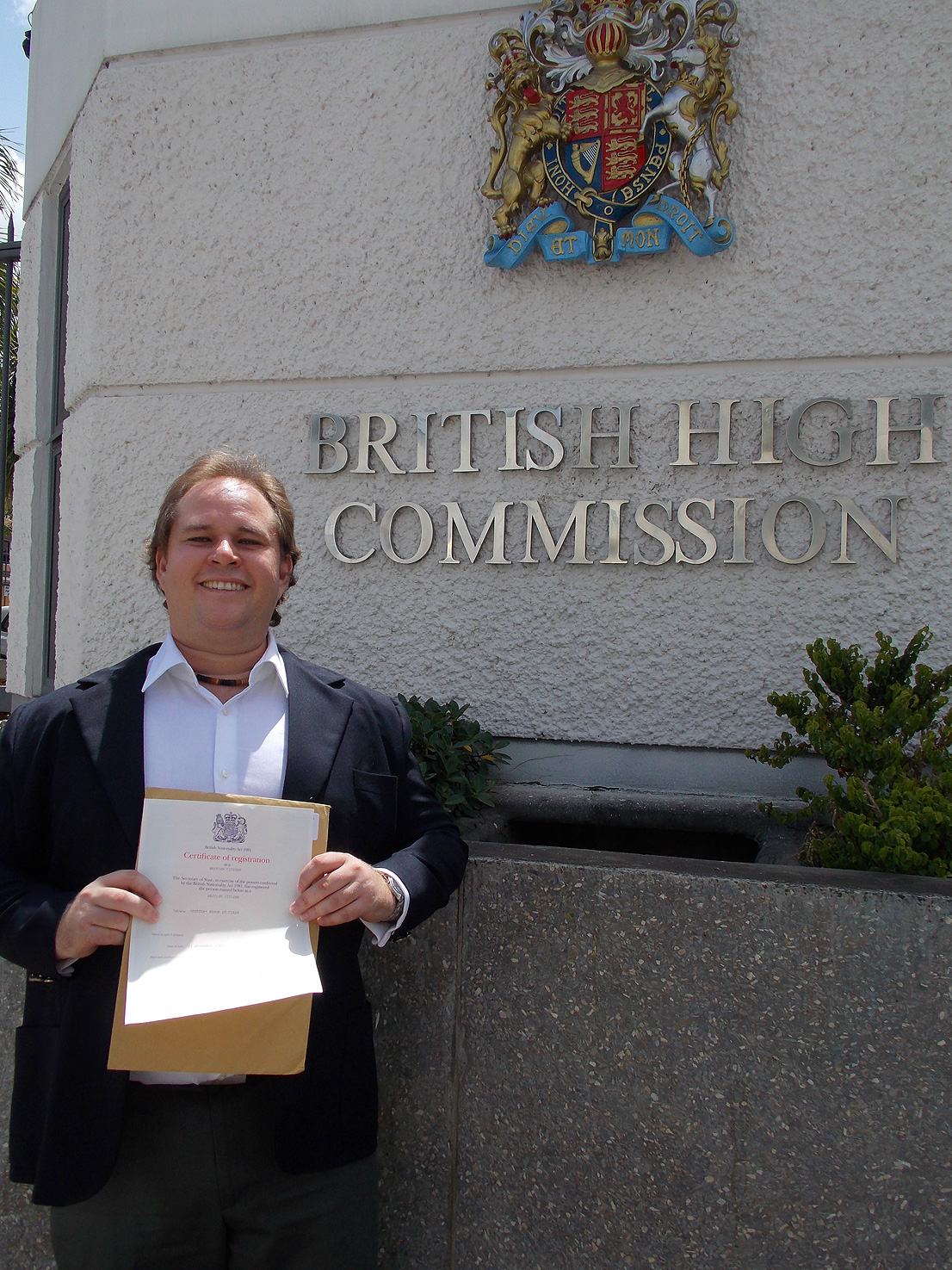 In November of 2012, the Royal Family team embarked on a mission trip to Thailand and Singapore. It was the first time most of us had met together to do the work of ministry for 11 days on the ground. In preparation for this trip, I had to cut short my ministry travels to return to Trinidad and Tobago to apply for my Visa necessary to enter Thailand.

Now, as I am a citizen of Trinidad and Tobago, there are a series of matters that must be addressed when it comes to visa’s to travel to foreign countries. Firstly is the matter of where is the Embassy or Counsolate to which I need to apply for Said Visa. In the Case of Thailand, by God’s Grace, we recently had a consolate open in Trinidad and Tobago, making the process easier. Before that, I would have had to send my passport and supporting Documents to Canada.

Next there was the matter of the yellow fever shot, plus the process of getting a United Nation World Health Travel Document to show I had Got the Shots necessary to enter the country. After being poked, proded and shuffled around a bit, between health centers, banks and other miscellaneous offices, I finaly had everything in order, and applied for my appointment. In all fairness, the process was quick and smooth, and the counsolate was very efficient.

But this has become the overarch routine for ministry travel. For instance, we had a recent invitation to Albania, in Europe, from which I would have had to send my passport to London in the United Kingdoms to get my Visa. Similarly, for this trip, I had to find a route to fly to Thailand, that didn’t involve me having to transition in a country that would require an entry/transit visa. Even if I happen to have access to a local embassy, the demands to secure a visa are just sometimes insurmountable, as in the case of the Canadian Visa.

All in All, I realized that If I am going to continue to travel and share the message of Jesus Christ’s finished work, a solution had to be presented by God for me to get around these hurdles. While I was back in Trinidad for the duration of the Thailand Visa experience, something had dawned on me, that I had been told was impossible to do in the past.

A flood of emotions came over me. Some of Joy and some of frustration for not knowing this sooner. I was kicking myself for not following up on this matter earlier. Now I started to do the researched into what the process was and how I may qualify for British Citizenship through my mother. I returned to the United States, and upon completion of our Thailand Trip, I started to do research on the matter.

Now I had no real reference to start with. Anyone who has ever examined the means to attain citizenship in another country knows it can be a costly and daunting experience. I started reading blogs, sending messages to British solicitors and It was all a fog really. I wasn’t getting a clear response from anyone. Eventually on the hundreth time of reviewing the UK Border Agency Homepage, I realized first and foremost, I was going to need my Mother’s Naturalization Ceriticate. So I call home to Trinidad and asker her to look for it.

A few weeks later, I called back, only to learn she could not find it. So back onto the Internet to find out how to go about retreaving a Lost Document with little more than a Name, date of Birth and general timeframe for her naturalization. First I tried the online registry, but the document was outside their online records. I was redirected to the National Archives, where I would petition a search clerk to see if they can find the records. At this point is seemed pretty bleak, but I filled out the request, and submitted my application for search, and then played more of he waiting game.

Daily I would check my E-Mail account to see if I had a response from the Archives, but nothing came. I had all but resigned myself to the end of the process, when I tried searching my email account for the word “Archives.” Boom! Something showed up in my Spam folder (thank you Gmail.) It was a reply from the National Archives, they had found the records and had attached an invoice to have a copy certified and set to my mother in Trinidad and Tobago. I was one step closer.

My travel time kept me out of Trinidad for another 2 months, and I was constantly enquiring if the package had arrived. For weeks there was no word, and thoughts of having to reapply kept plaguing my thoughts. About a month before I was to Return, I was notified that there was a bulky package waiting for me at the regional post office, which I believed was the Certificate.

My research continued, I kept looking for one of those immigration solicitors that can give a Free Consultation. There were so many different ways it could have been done, some appeared more complicated than others. I was in desperate need of some direction. After sending multiple request to various firms, one finally responded by directing me to something called the UKM form for applicants Born outside the UK to a British Mother before 1983.

The reason that was significant, for those who may not know, British Citizenship, up to that point, could only be transferred through the Father. Until 1983, mothers were included and the process was backdated. Apparently, I just had to fill out this Form, pay the fee and send off the supporting documents and wait 6 months for the Citizenship. Followed by another 6 weeks for the Passport.

When I finally returned to Trinidad on the 4th of February 2013, my second stop was to the Post Office, and Sure enough The large Print of the National Archive had confirmed my suspicions before I ever held the package in my hands. At that time, I started reading through the UKM form, expecting that it would be an Interogation like questionaire, requiring information of my ancestry going back 1000 generations. It really wasn’t. At first I thought I was going to need a Lawyer, but the form was very straight forward and the accompanying instructions made it easy to fill out.

At this point some friends of the Family had gotten wind over my application process. Some had even been through the experience themselves. One person commented on how expensive the whole process was, and it cost them nearly £1000. I started to get worried. I had no examined the fees structure as yet. I was just focusing on filling in the Form correctly.

Finally I had the form completed, pictures were taken, and some fellow friends of the family vouched for me as a countersigners. It was time to examine the fees, and send off the package. Now upon first examination, it truly did appear that this was going to be an expensive undertaking. The naturalization Fee on the Form cost £874. But I hesistaed for a moment, because the Form I had just filled out, the UKM form, had a cost attached to it, of only £80. I was confused, but decided that I would filled in the payment slip for £80.

By the second week of March, the United Parcel Service, picked up my package of documents, and my shipping fee. Included was the UKM form, 2 Birth Certificates for my mother and myself, 2 Photographs, 2 Passports one expired from my mother and my own, and lastly the payment slip. I was officially grounded, and it was out of my hands for what I suspected would be 6 months. Once the package reached its destination, there was no other way I could track the processs. A final email 4 days later acknowleding the receipt of the package, and the rest was a dark cloud of the unknown. I had to wait.

Ministry requests were still coming in during that season. The team had gone to Canada, a various states in the US, and even parts of Europe, all while I was waiting. I had to miss out on a Power and Love Conference and the chance to meet one of my heroes, Todd White, while this process was underway. How I longed to be back on the road with them again. Invitations to St. Lucia, Barbados, and Jamaica, all on hold, as I awaited my fate, as well as the return of my original Passport.

Something very strange happened in the second week of April. I got a call from a number I recognized to be in Port of Spain, and lady was on the other end asking to Speak to Brook Potter. I had no real clue who this person was, and I acknowledged the call. She proceeded to tell me that she was from the British High Commission in Port of Spain, and she had received all my documents back from Citizenship application. I thought to myself, “Oh No, something has gone wrong.” She asked When I would be able to come and collect them. I said, i’ll be in the area the next day, Wednesday, taking my mother to a dental appointment I could pass then.

The lady went on to explain that the Commission is closed on Wednesdays, but I can pass on the Thursday to collect the package. I’m still a bit confused, but I agreed. She then went on to say that my applciation was Successful! I was speechless…

I got off the phone, glanced at the Calendar which oddly was still in the month of April, when this was supposed to be happening closer to August! Somehow, what was meant to take 6 Months, had taken place in 4 weeks! I walked up to my mother and told her the good news, and we were all overjoyed.

That Thursday I collected my documents, without the acceptance letter, seeing as it was addressed to the lady at the embassy and not to myself. She called me a Few day later, and we arranged a time to visit the High Commission, to do the formal swearing in ceremony.

On the 16th of April, 2013, before God and a portrait of the Queen, by the witnesses of my two friends, Terrence Hosang and Nirala Singh-Balkaran and the staff of the High Commission, I swore allegance to Queen Elizabeth II and her heirs, and to uphold the laws and freedoms of a British citizen. From that day, I am a British Citizen.

As of this day, I have just applied for my British Passport. This marks the end of many of my travel woes for Ministry. I will now have much easier access to North America and Europe that was previously not available to me. I look forward to seeing all the open Doors God has for me, as a citizen of both Heaven, and the United Kingdoms of Great Britain and Ireland.