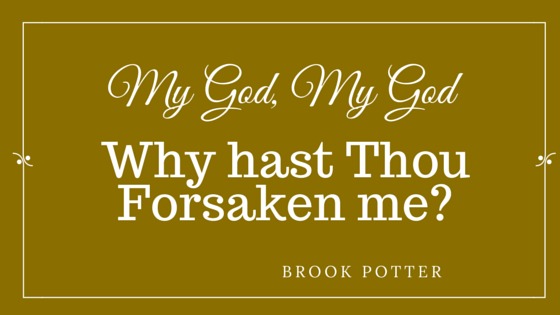 Matthew 27:46  And about the ninth hour Jesus cried with a loud voice, saying, Eli, Eli, lama sabachthani? that is to say, My God, my God, why hast thou forsaken me?

I’ve often wondered why the Holy Spirit never translated the words of Jesus in the above Scripture into Greek. In the earliest greek manuscripts, the above words appear in Hebrew. Further, every other time Jesus refers to God, he used the word, Father, but in this instance, he used the word God.

Now I believe there is something really powerful going on here, but to recognize it, we must understand a little bit about the culture of the day. To the Jews, looking upon Jesus on the Cross, it would be easy to assume that he was being punished for his blasphemy by God. In fact, the scriptures record their thoughts.

Isaiah 53:4 Surely he hath borne our griefs, and carried our sorrows: yet we did esteem him stricken, smitten of God, and afflicted.

Notice the verse says, We Did Esteemed Him stricken, referring to the thinking of the Jews that were witnessing Jesus on the Cross, believing that what they were seeing was the judgement of God.

This is why the Hebrew Words Jesus used were so powerful. He is Quoting from King David’s Psalms 22:1 My God, my God, why hast thou forsaken me? why art thou so far from helping me, and from the words of my roaring?

The Jews would have realized that, and recalled it to their minds, the whole Psalm. And therein is the great wisdom of the Moment, as the Jews were recalling to their mind the messianic psalm, they would have finally reach the verse that Jesus wanted them to recognize.

Psalms 22:24 For he hath not despised nor abhorred the affliction of the afflicted; neither hath he hid his face from him; but when he cried unto him, he heard.

While the whole world thought God had Forsaken the Son, Jesus was actually showing them in the Palms of David, that God had done no such thing. This is later attested to by Paul, about the crucifixion; 2 Corinthians 5:19  To wit, that God was in Christ, reconciling the world unto himself, not imputing their trespasses unto them; and hath committed unto us the word of reconciliation.

I say all that, as a testimony to the Faithfulness of our God. Many of us today, with our western thinking also believe that The Father forsook the Son on the cross, and we feel that at any moment, He may forsake us over our sin and disobedience.  The very passage that was meant to put our fears to rest, the enemy has used against us.  For those of us, part of the Family of God, we can know that the Father never forsook the Son and we can rest in God’s Faithfulness towards us that nothing can Separate us from his Love.  Romans 8:39

John Schoenheit talking about if Jesus was Forsaken on the Cross: