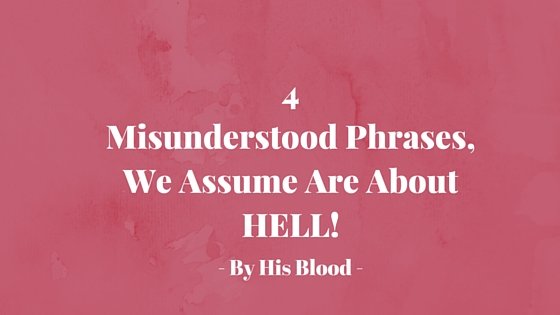 Brook Potter “When someone says that Jesus taught about Hell more than anything else in his earthly ministry, it’s obvious that person get’s their theology from Christian Television more so than from study.”

One of the most common logical fallacies used by Christians is the fallacy of Incredulity. It is sometimes called the “Lack of Imagination Fallacy,” because it basically assumes that if a person doesn’t understand, or can’t imagine a certain position, that position is automatically wrong.

Needless to say, that sort of logic is blatantly flawed. To this day, no one truly understands gravity, but it remains a very real factor in our every day lives.

When it comes to the subject of hell, there is great debate on the subject. For most believers, the doctrine of hell is an idol. It remains mostly untouched, unstudied and just accepted, for fear that they may end up there for questioning it.

But for some believers, they actually take Paul’s command of studying the Word to heart. They have actually invested a great deal of time and energy into this subject. In so doing, they have come to varying positions on one of the three major views, Infernalism, Conditionalism, and Universalism.

At this point, a person who may come to a different understanding of the topic of Hell, outside the Eternal Conscious Torment theory, is generally faced two common objections.

Firstly, it is believed that such a person has been deceived by the devil, followed by their abandonment of the truth of Scripture. With nothing more than a surface reading of Scripture, coupled with man-made traditions and teaching from the Church, most believers just cannot believe their Bible might actually teach something other than what they currently believe.

It is greatly dishonest to say that Conditionalist or the Universalist has been deceived or abandoned the truth of Scripture, when most believers in Infernalism wouldn’t even study the subject, far less read other believers’ arguments and Scriptural studies to see how they have arrived at their position.

So with that said, I’m looking at 4 common phrases used in the New Testament that are commonly believed to be related to the afterlife and Hell, to give an example of why our assumptions are not actually found in the Scriptures themselves.

For the purposes of this article, I’ll be skipping over the fact that there are four distinct words translated as Hell, and each has it’s unique uses, Sheol, Hades, Tartarus, and Gehenna. But anyone doing a further study, should look into these words more closely.

Matthew 3:12 Whose fan is in his hand, and he will throughly purge his floor, and gather his wheat into the garner; but he will burn up the chaff with unquenchable fire.

It is very easy for a person to read this statement by John the Baptist and take the modern literal meaning and say, “Ah ha! There it is! Unquenchable fire means the fires of hell burn forever!”

The Annihilationist may say in response, “Well yes, the fires burn forever, but not the contents! The verse says that the chaff will ‘burn up’, imply that they will eventually come to nothing.” So far from being eternal conscious torment in that fire, the person will burn up into non-existence.

The Universalist can say, “The phrase ‘unquenchable fire’ has been used in Scripture before to describe God’s judgement against Nations. When Jeremiah spoke about the coming destruction of Jerusalem by the Babylonians, unquenchable fire or fire that cannot be quenched was used to describe the national judgment.

Personally, I believe the Universalist has the better argument, his view actually gives a best match for the verse. When we compare Scripture with Scripture, we see other places where unquenchable fire is used to describe Jerusalem’s judgment in this life.

Jeremiah 7:20 Therefore thus saith the Lord GOD: Behold, mine anger and my fury shall be poured out upon this place, upon man, and upon beast, and upon the trees of the field, and upon the fruit of the ground; and it shall burn, and shall not be quenched.

The position of national judgment also fits the Annihilationist’s point about the chaff, being burned up. But we will explore than in the next topic.

2. Worm that dies not

Mark 9:43-44 And if thy hand offend thee, cut it off: it is better for thee to enter into life maimed, than having two hands to go into hell, into the fire that never shall be quenched: Where their worm dieth not, and the fire is not quenched.

Jesus uses this phrase, of fire that is not quenched and where their worm dies not, three times in the book of Mark, while talking to the Jews. It is a repeat of Jesus’ sermon on the Mount teaching from Matthew chapter 5.

Matthew 5:29 And if thy right eye offend thee, pluck it out, and cast it from thee: for it is profitable for thee that one of thy members should perish, and not that thy whole body should be cast into hell.

The Infernalist may say, “You see, there it is, hell is forever and you’re alive through the whole process, because the worms don’t die, far less for the people!”

The Annihilationist may say, “Maybe, but the verse doesn’t actually say that the person isn’t burned up or consumed entirely by the worms. It can just as easily be argued that the worms, like the fire, are there to consume the person and bring them to non-existence.”

The Universalist can say, “Jesus is quoting a passage from the Old Testament prophet Isaiah, where he foretold the destruction of Jersualem by the Babylonians. The verse has nothing to do with the afterlife, as the people are said to go out and behold the dead bodies of the wicked breakers of the Law.

Isaiah 66:24  And they shall go forth, and look upon the carcasses of the men that have transgressed against me: for their worm shall not die, neither shall their fire be quenched; and they shall be an abhorring unto all flesh.

Jesus is quoting this verse saying what happened with Babylon is going to happen again with Rome.”

If the Universalist is right, and these passages are talking about National Judgment, they would also satisfy the Annihilationist’ position, about being “burn up” and the people eventually coming to nothing. The difference is that the Universalist sees that people’s BODIES come to nothing, and that these verses are not actually talking about the afterlife.

3. Weeping and Gnashing of Teeth.

Matthew 13:41-42 The Son of man shall send forth his angels, and they shall gather out of his kingdom all things that offend, and them which do iniquity; And shall cast them into a furnace of fire: there shall be wailing and gnashing of teeth.

The infernalist may say, “You see, those in Hell will be weeping and gnashing their teeth over the missed opportunity to hear the Gospel, believe and be saved!”

The Annihilationist may say, “Yes, but it does not say that the suffering will go on forever. Their weeping and gnashing of teeth can be seen as temporary until they are eventually consumed in the flames.”

The Universalist can say, “Jesus is quoting from the book of Lamentations about the destruction of Jerusalem by the Babylonians, as a warning of what was about to happen to Jerusalem by the Roman forces in 70 AD.

Lamentations 2:15-16 All that pass by clap their hands at thee; they hiss and wag their head at the daughter of Jerusalem saying, Is this the city that men call The perfection of beauty, The joy of the whole earth?All thine enemies have opened their mouth against thee: they hiss and gnash the teeth: they say, We have swallowed her up: certainly this is the day that we looked for; we have found, we have seen it.

This is more evidence to suggest that the weeping and gnashing of teeth is something that happens on the earth, and not in the afterlife.

Another use of the weeping and gnashing of teeth, that suggest that the phrase may be used on the Earth, is actually the reference in the Book of Luke.

Verse 29 describes those who come from the north south, east and west and shall sit down in the Kingdom of God. The fact that there are no such directions in the afterlife can suggest, while not conclusively so, that these verses are talking about something that happens on the Earth.

Matthew 11:23 And thou, Capernaum, which art exalted unto heaven, shalt be brought down to hell: for if the mighty works, which have been done in thee, had been done in Sodom, it would have remained until this day.

The last use of Hell in the Scriptures that I want to examine, is something that generally Infernalist and Annihilationist tend to overlook entirely. It’s the fact that the word Hell itself, is often depicted to describe national judgment in both the Old and New Testaments.

The reason it’s not discussed by either group is because it’s evident that the use of the word in it’s context, is talking about the destruction of a city, and not people. Seeing how the word is used in the other places of Scripture is the best way to determine it’s meaning in our texts. In the case of Matthew 11:23, it’s clear that Capernaum being brought down to hell does not mean the entire city descending into some infernal torture chamber; instead it means the city will be judged and destroyed.

Similar uses of the Old Testament word, Sheol, translated as hell, can be seen having the same use. Isaiah 14:4-15. While there is great debate about these passages being in reference to Lucifer (Isaiah 14:12), the context of the verses themselves suggest more inline with the King of Babylon and the nation of Babylon being destroyed.

We learn from verse 4, Isaiah 14:4 That thou shalt take up this proverb against the king of Babylon, and say, How hath the oppressor ceased! the golden city ceased!

This passage about Babylon’s judgment ends with the same words Jesus quotes concerning what will happen to Capernaum.

Isaiah 14:15 Yet thou shalt be brought down to hell, to the sides of the pit.

Both the Annihilationist and the Universalist draw their conclusion from the study of Scriptures, not the abandonment of it. Similarly, it is not deception of the devil, but rather the context, history and word studies of Scriptures that can lead people to a different view on the subject of Hell. I would argue that an Universalist, in order to arrive at that position, must have even greater knowledge and understanding of these things, in order to explain all the assumed hell passages in a different context.

On a final note, no Christian, no matter what their view of Hell, is ever in danger of going there. Many try to bully and intimidate people of different views, by threatening that they are going to hell if they don’t agree with their understanding. Anyone who suggests that, firstly is commiting the “Appeal to the Stick” logical fallacy, but secondly, they are admitting their belief that we are saved by our doctrines, and not by Grace through Faith.

I would remind such a person that Apostle Stephen, when he was stoned in Acts 7, was a Jewish believer of the Messiah. Everything about his understanding of Scriptures was centered around the Law of Moses. He never read the writings of Paul, or any part of the New Testament.

He didn’t know any of the modern Christian teachings that we hold sacred, and we would have nothing in common with him theologically, apart from our belief in Jesus Christ as Messiah. With that said, I would challenge any of these people who claim a different doctrine sends you to hell, to label Stephen a false teacher and claim he went to Hell.